A Democratic super donor, Tom Steyer, has deeply criticized President Donald Trump’s decision to pull out of the Paris Agreement, a greenhouse gas emissions mitigation effort signed by former President Barack Obama in 2016. The effort would reportedly lower global temperatures by only 2/3 of a degree by 2100 but require the United States to send hundreds of billions of dollars to developing nations over the next few decades and lower manufacturing and other industries in the U.S.

President Trump has said he is willing to renegotiate the terms of the deal.

In advance of the President’s announcement, Steyer tweeted on May 28 that “[i]f Trump pulls the US out of the [Paris Agreement] he will be committing a traitorous act of war against the American people.” 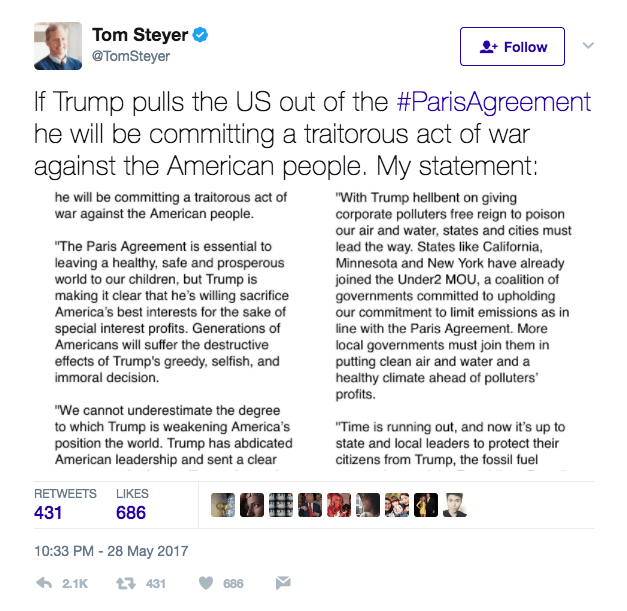 “The Trump Administration has just committed assault and battery on the future of the American people,” Steyer tweeted Thursday. “There can be no excuse for this willful crime, but the rest of us must resolve to continue the fight for a wiser and more just course of action.” 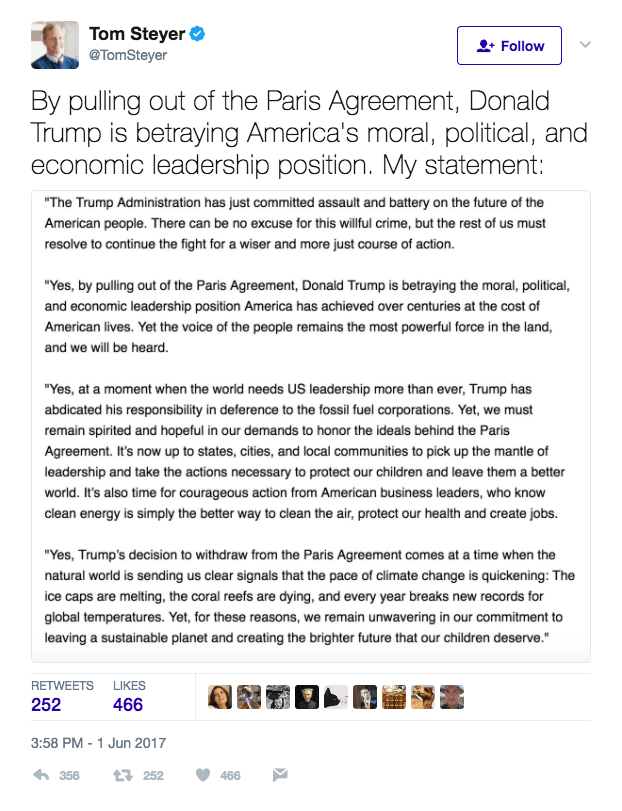 Steyer is a billionaire philanthropist, environmentalist and advanced energy advocate.

He is the founder of NextGen Climate, a group that was very active during the presidential campaign. NextGen Climate “acts politically to prevent climate disaster and promote prosperity for every American,” according to its site. In the past, Steyer has raised money for Hillary Clinton and donated millions of dollars to liberal candidates.

“By pulling out of the Paris Agreement, Donald Trump is betraying America’s moral, political, and economic leadership position,” Steyer tweeted.

The Paris agreement says that each country that signs will determine its contribution to mitigate global warming. The United States now joins Nicaragua and Syria as the only countries who are not part of the agreement.

The President said on Thursday that, “[…] as of today, the United States will cease all implementation of the non-binding Paris accord and the draconian financial and economic burdens the agreement imposes on our country.”

“This includes ending the implementation of the nationally determined contribution and, very importantly, the Green Climate Fund, which is costing the United States a vast fortune,” Trump pointed out.

“Compliance with the terms of the Paris accord and the onerous energy restrictions it has placed on the United States could cost America as much as 2.7 million lost jobs by 2025, according to the National Economic Research Associates,” the President said.

That includes 440,000 fewer manufacturing jobs, the President said – “not what we need.” Trump added that by 2040, “compliance with the commitments put into place by the previous administration would cut production for the following sectors: paper, down 12 percent; cement, down 23 percent; iron and steel, down 38 percent; coal, and I happen to love the coal miners, down 86 percent; natural gas, down 31 percent.”

“The cost to the economy at this time would be close to $3 trillion in lost GDP and 6.5 million industrial jobs, while households would have $7,000 less income, and in many cases, much worse than that,” he said.

The President tweeted Thursday night that “[m]y job as President is to do everything within my power to give America a level playing field,” adding a hash tag of “America First.” 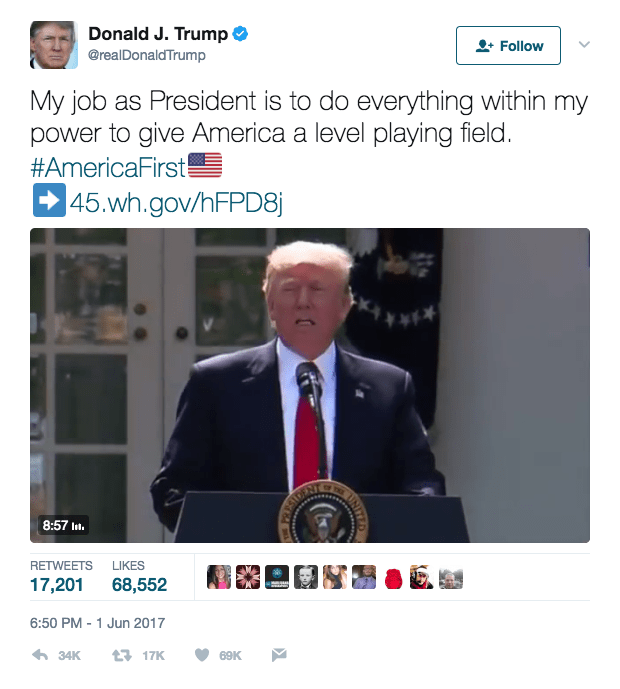 The President said Thursday that “[…] the United States will withdraw from the Paris climate accord, but begin negotiations to re-enter either the Paris accord or [an] entirely new transaction, on terms that are fair to the United States, its businesses, its workers, its people, its taxpayers.”

“So we’re getting out, but we will start to negotiate, and we will see if we can make a deal that’s fair,” the President said. “And if we can, that’s great. And if we can’t, that’s fine. As president, I can put no other consideration before the wellbeing of American citizens.”

“The Paris climate accord is simply the latest example of Washington entering into an agreement that disadvantages the United States, to the exclusive benefit of other countries, leaving American workers, who I love, and taxpayers to absorb the cost in terms of lost jobs, lower wages, shuttered factories and vastly diminished economic production,” he said.