Watch an Apache helicopter take out a boat full of terrorists

In this unconfirmed video, an Apache helicopter takes out a group of terrorists loaded in a boat. You can see and hear the actions and comments of the command and control center as the situation develops.

The boat was spotted on the Tigris River in 2007. Pilots with 1-3 Attack Aviation followed it as it had three suspected enemies on board. 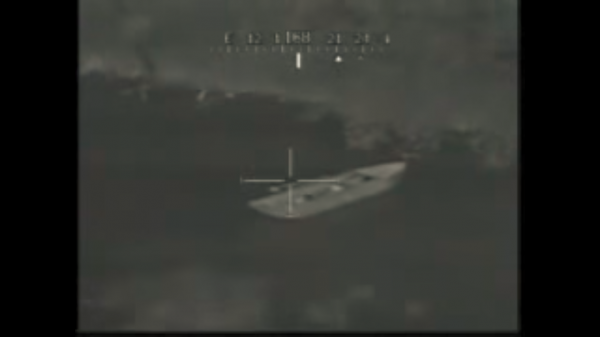 You can hear the discussion on the radio that two of the enemy personnel are seen jumping out of the boat and trying to swim away. The third individual worked to dump all the goods into the water before joining the others for a swim. The pilots are discussing the visible wake left in the water behind them. 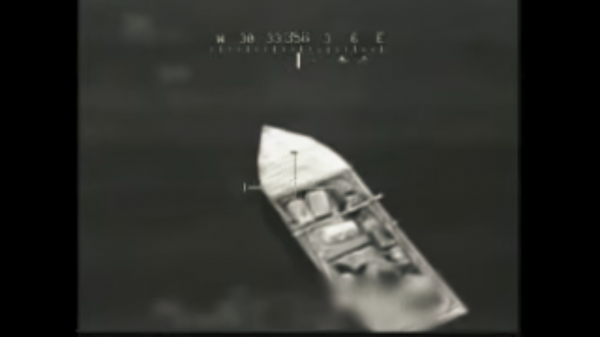 Before they could get too far, AH-Apache helicopters engaged and unloaded 60 rounds of 30 mm ammunition on the enemy. The incoming rounds hit the boat and everything around it. The boat was completely destroyed in a matter of seconds. According to the video, these kinds of engagements “limit insurgent access to these waterways and limit the enemy’s freedom of maneuver.”

Check out the whole scene play out below:

The Boeing AH-64 Apache is a four-blade, twin-turboshaft attack helicopter with a tandem cockpit for a two-man crew and armed with a 30 mm M230 chain gun under the aircraft’s forward fuselage.

The Apache was developed for the United States Army’s Advanced Attack Helicopter program to replace the AH-1 Cobra.

In Sept. 1975, the prototype YAH-64 was first flown and was later approved for production in 1982. However, the Apache helicopter wasn’t introduced to the United States Army until 1986.

Since their introduction into the U.S. Army, the AH-64 Apache has been involved in a number of conflicts including Iraq, Afghanistan, Panama, the Persian Gulf and Panama.

While the Apache is primarily used by the United States Army, several other countries including Japan, Singapore, the Netherlands, Kuwait, Greece and Israel use the Apache as their primary attack helicopter.

In Aug. 1997, the helicopter unit became a part of The Boeing Company when Boeing and McDonnell Douglas merged.

According to the Boeing website, “the AH-64 Apache is the world’s most advanced multi-role combat helicopter and is used by the U.S. Army and a growing number of international defense forces. Boeing has delivered more than 2,200 Apaches to customers around the world since the aircraft entered production. The U.S. Army Apache fleet has accumulated (as of July 2016) more than 4.2 million flight hours since the first AH-64A was delivered to the U.S. Army in January 1984.”