UPDATE: Hours after the video was released, comedian Kathy Griffin issued an apology and has had the videos taken down. However, TMZ still has its copy of the video up, which you can see below.

“I am sorry. I went too far. I was wrong,” Griffin tweeted. 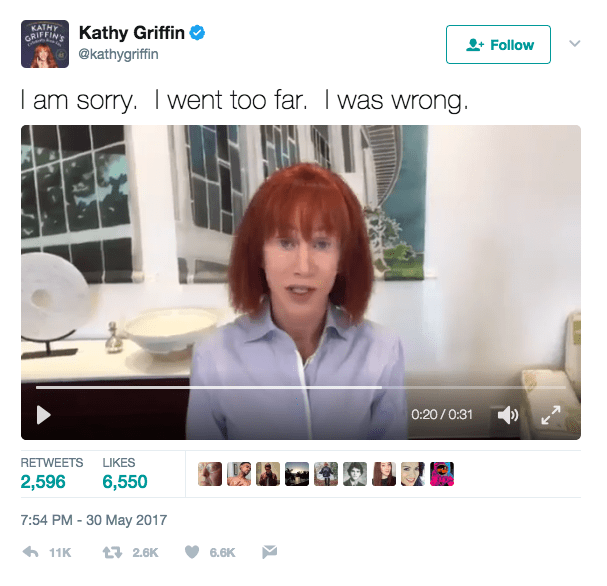 Griffin said she “crossed the line” in her video depicting the President as decapitated and bloodied, and that she u

“The image is too disturbing,” she added. “I understand how it offends people. It wasn’t funny.”

“Threats made against Secret Service protectees receive the highest priority of all our investigations,” it tweeted, adding the hash tag “Protection Never Rests.” 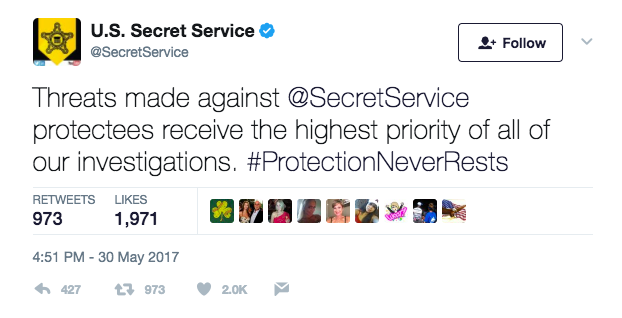 Comedian Kathy Griffin recently posed for a photo shoot holding a bloody mask-head made in the likeness of President Donald Trump, and the video footage is somewhat shocking – as it was intended to be.

According to TMZ, Griffin joked with photographer Tyler Shields that the two of them would have to move to Mexico in fear of imprisonment once the images were released.

“Kathy and I are friends and we worked together before, so when we started doing this shoot, she said, ‘I’d love to do something political. I’d love to make a statement,’ ” Shields told Fox News. “We kind of figured out what would be the best image to make out of that.”

Shields said he understands that the images and video, which he describes as art, will be offensive to some people.

Here is a behind the scenes video of Kathy Griffin on set.

“That’s what art is meant to do,” Shields said. “Some people look at it and they love it. Some people look at it and they hate it… I understand there are going to be people that hate this. It’s a very touchy subject… but this is not real. We didn’t kill anybody nor do I feel anybody should be killed. It’s no different from a movie. It just happens to be a still image.”

Shields added that he does not regret creating such a controversial image.

“I can’t speak for her, [but] I know she loves to stir the pot,” he said. “For me, I love the idea we have freedom of speech. The fact that I’m allowed to make an image like this says a lot. To me, that’s a powerful thing… nobody’s killed me for this image so it’s not that bad. I love Kathy and I hope they let me visit her in Guantanamo.”