The United States has deployed the aircraft carrier USS Carl Vinson to the disputed waters of the South China Sea as part of maritime “routine operations.” But in the current scenario, the deployment can be called anything but routine.

China has a long history of maritime disputes with its South China Sea neighbors. It claims almost all of the South China Sea, including islands more than 800 miles from the Chinese mainland, despite objections from neighbors such as the Philippines, Malaysia, Brunei and Vietnam.

The question is, how powerful can a single aircraft carrier group could be, and why a giant such as China would be afraid of it?

Beijing has also created artificial islands in the area, outfitting some of them with military features. According to the U.S., China has reclaimed more than 3,000 acres in the Spratly Islands since 2014. Though the U.S. takes no position on the territorial dispute in the South China Sea, its warships have conducted routine “freedom of navigation” operations near the reclaimed islands, eliciting warnings from Beijing.

Patrols by USS Carl Vinson are seen by military experts as a way of sending direct message to China and reassuring the U.S. allies. The USS Carl Vinson (CVN-70) is the third U.S. Navy Nimitz-class supercarrier, The Vinson carries a flight group of more than 60 aircraft, including F-18 jet fighters. These are twin-engine, supersonic, all-weather carrier-capable 4th generation multirole fighter aircrafts that have a payload of 17000 lbs, and can carry ground attack weapons as well as air-to-air missiles. 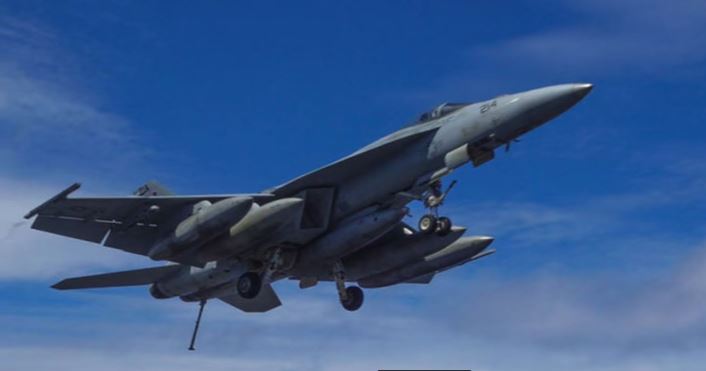 Here are just some of the things that makes the USS Vinson such a powerful weapon, and the reason why China and the rest of the region is paying attention.