Things got a little wild on the Texas House of Representatives floor this week when a Texas Republican representative and Democrats started slinging words – and allegedly threatening violence – over the presence of illegal immigrants in the gallery.

Rep. Matt Rinaldi, a Republican, told Democrats on Monday that he had called Immigrations and Customs Enforcement (ICE) officers to report the illegal immigrants who were protesting, observing and holding signs in the House gallery stating that they were illegal immigrants.

Video footage shows the scuffle that followed, and some men have to be restrained from going after one another. But what has ensued since is a “he said, she said” of violent exchanges across the aisle. 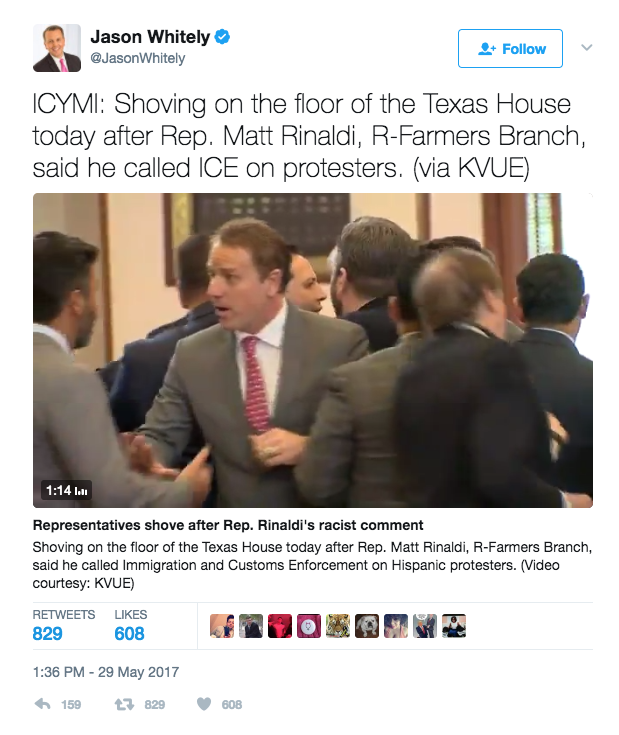 According to a report, Rep. Philip Cortez, a Democrat, said “[w]e were just on the floor talking about the SB4 protests, and [state Rep.] Matt Rinaldi came up to us and made it a point to say, ‘I called (ICE) on all of them.’ And this is completely unacceptable. We will not be intimidated. We will not be disrespected.”

Rinaldi posted a statement regarding the incident on both his Facebook and Twitter pages, saying he “called ICE on several illegal immigrants who held signs in the gallery which said ‘I am illegal and here to stay.’ ”

Rinaldi claims Rep. Poncho Nevarez “threatened my life” on the House floor after he said he called ICE, and Rep. Ramon Romero “physically assaulted me, and other Democrats were held back by colleagues.” 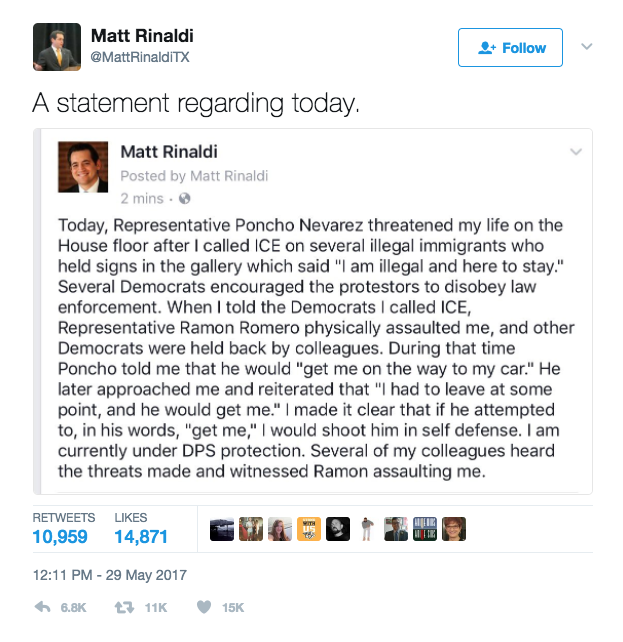 Rinaldi also claimed that Poncho said he would “get me on the way to my car,” and later said that when he inevitably left the building, “he would get me,” referring to Rinaldi.

That was when Rinaldi stepped up to his own defense, he claimed, stating that he “made it clear that if he attempted to, in his words, ‘get me,’ I would shoot him in self defense.”

The issue of illegal immigrants has been a contentious topic among Texas representatives as of late.

The protestors were reportedly chanting and holding signs against Senate Bill 4, or SB4, which is Texas legislation that bans sanctuary cities, allows police to question anyone detained over their immigration status, and encourages officials to comply with federal requests to detain people in state and local facilities.

Republican Gov. Greg Abbott signed SB4 into law this month, during a time when the national conversation about immigration has come to a boil – especially as President Donald Trump has promised to aggressively pursue and deport illegal immigrants in this country, and build a wall to keep illegals out of the United States. 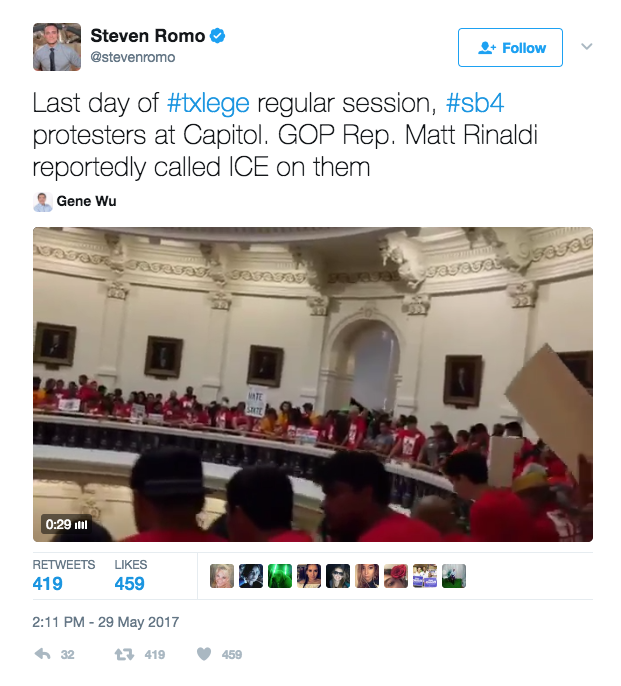 And this week, when Rinaldi was met with a hoard of Democratic representatives on the floor of the House, is when things reportedly became nasty.

“There was a threat made from Representative Rinaldi to put a bullet in one of my colleagues’ heads,” Rep. Justin Rodriguez said during a news conference held after the House session. “That kind of threatening language, he needs to be called out and held accountable for.”

Rinaldi’s colleagues heard the threats and he is currently under the protection of the Texas Department of Public Safety, Rinaldi said.