Allegations have emerged against a mortuary official at Dover Air Force Base for offering to show visiting inspectors the body of recently deceased astronaut and Marine veteran John Glenn during a planned inspection visit in March.

The inspectors hastily declined the morbid offer and never viewed the remains but instead quickly reported the employee, Bill Zwicharowski, who is the mortuary’s branch chief.

Deborah Skillman, who serves as the Department of Defense’s Director of Casualty and Mortuary Affairs, said in a memo obtained by the Military Times that, “[c]oncerning to me, is that even after Mr. Zwicharowski was counseled by his chain of command regarding the inappropriate nature of his earlier offer, he repeated it.” 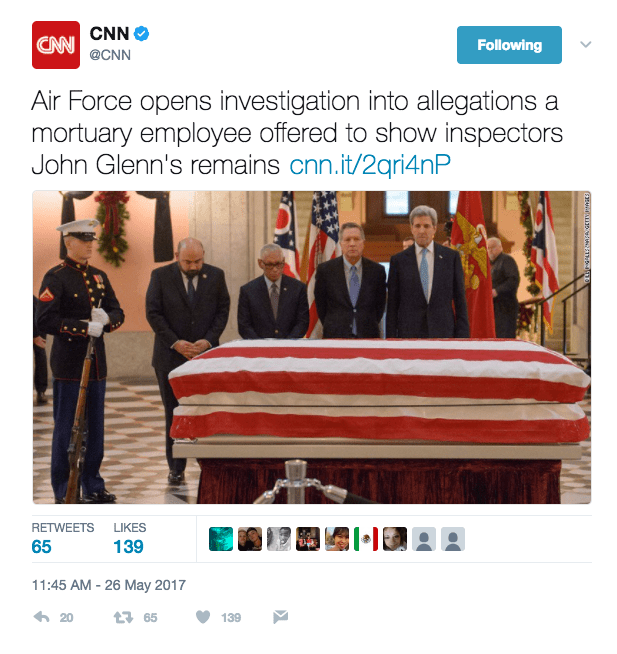 “[ … ] This breach of protocol is serious and troubling as these offers were made to members of an official Department of Defense inspection team on-site to inspect the facility and determine whether it was in compliance with applicable procedures and policy and being well-run by its leadership,” she added.

Zwicharowski spoke to the New York Times on Monday, saying that he had been “detailed into another job temporarily” that was not “mortuary-related.”

He also told the Associated Press that “he’s proud of the job he and his staff did in caring for Glenn’s remains.”

His removal follows the beginning of an investigation led by the Air Force’s Inspector General into Zwicharowski’s alleged misconduct, prompted by Air Force Secretary Heather Wilson after receiving the memo from Skillman and her team of inspectors.

Glenn’s family had been notified of the allegations of misconduct. His family could not be reached for comment.