Russia Insider, a pro-Russia publication based out of Russia, was launched in 2014 and has had a slew of attention-grabbing, sensational headlines that pump up Russia and slam the U.S. While often times incredibly exaggerated and falsified, they are undoubtedly still entertaining.

Russia Insider’s founder, Charles Brausman, has been outspoken about how he believes U.S. news agencies generate a false perception of Russia because news organizations hire low-paid content writers who don’t know anything about Russia and have likely never been to the country at all.

Here are some of Russia Insider’s most outrageous headlines from recent weeks:

“Repeat After Us: ‘Putin Has Hacked Every US Election Since 1789‘”

On the latest Washington Post story that made headlines this week:

“Washington Post: Trump Leaked ISIS Secrets to the Russians That Are So Sensitive, We Can’t Even Talk About Them”

“Treason? I’m With The Russians, They Hate Us Less Than The Media Do!”

They also poke fun on the U.S. blaming Russia for seemingly every issue:

“We’ve Just Seen the Biggest Cyber Attack Ever and Russia Wasn’t to Blame. How Come?”

“Rude Putin Played Hockey Instead of Answering 1,000 Questions About Something He Has Nothing to Do With”

“US Pilot Hailed as Hero After Not Bombing Hundreds of Civilians”

“Washington Post: Watch Out, Russians Are Using Humor to ‘Undermine the West’!”

“How ‘The Donald’ Proclaimed Himself the Empire’s Spanker-In-Chief, Killed His Presidency and Became a Laughing Stock”

They don’t mind making fun of the President of the United States’ family either:

“US Now Relatively Confident Russia Is Not Trying to Annex Alaska”

“Are You Into Slavery? Then You Should Definitely Be Backing US Regime Change in Syria”

“Science Confirms NATO Is a Baboon Troop, US the Twitchy Alpha Male”

“Don’t Let the Media Make You Fear War With North Korea. Turn off Your iPhone and Go for a Walk”

“Famous NYT Idiot Says: Leave ISIS Alone! Use It Against Iran and Russia Instead”

“James Mattis Admits He Only Has 20 Brain Cells”

Russia Insider is also particularly outspoken about their disdain for “former Waffle House waitress” Nikki Haley, the U.S. Ambassador to the U.N. 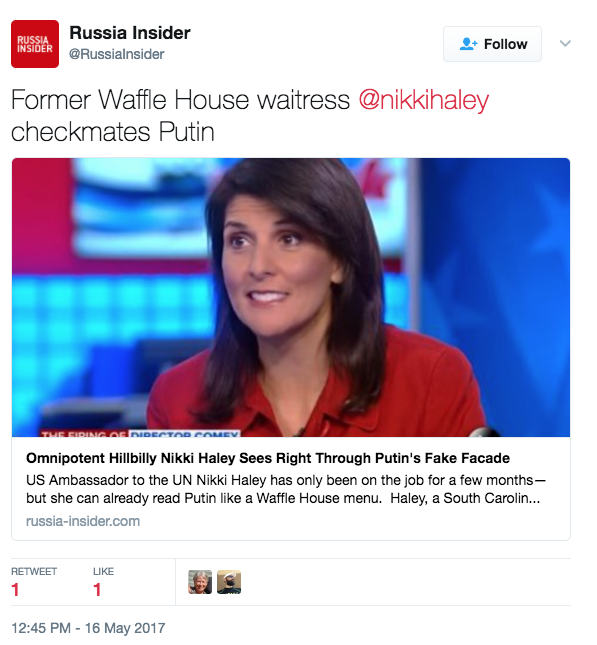 The article goes further into the joke.

“US Ambassador to the UN Nikki Haley has only been on the job for a few months—but she can already read Putin like a Waffle House menu,” they write. 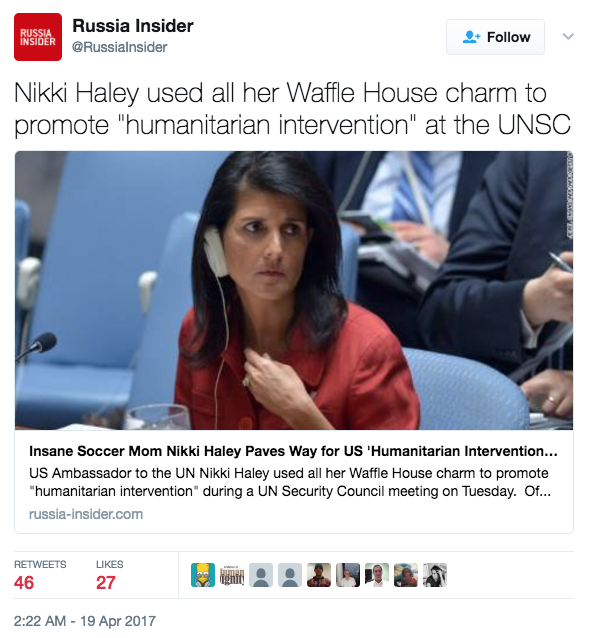 “Nikki Haley used all her Waffle House charm to promote ‘humanitarian intervention’ at the UNSC,” another post from April says.

Russia Insider also has an ongoing Internet feud with journalist Louise Mensch, so much so that their Twitter bio reads solely: “Louise Mensch’s favorite Kremlin troll.”

Russia Insider’s pinned tweet shows Mensch made them the focus of her bio in return. 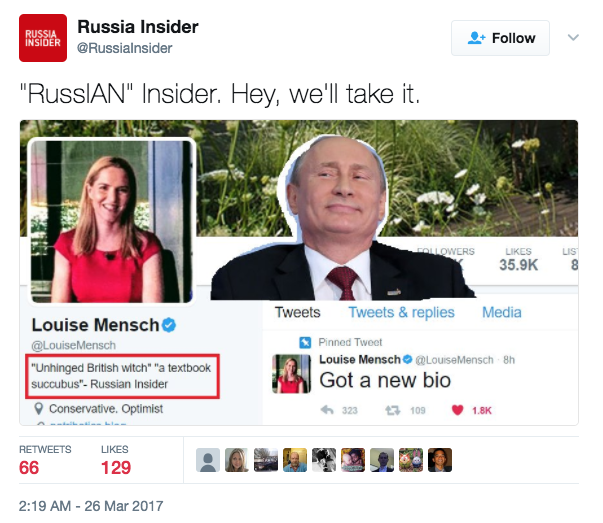