The United States Air Force aircraft from the 18th Wing at Kadena Air Base in Okinawa, Japan conducted a large elephant walk during a no-notice exercise on Apr. 12, 2017.

An elephant walk is an Air Force term for when military aircraft taxi in close formation on the runway right before takeoff. It typically takes place right before a Minimum Interval Takeoff. 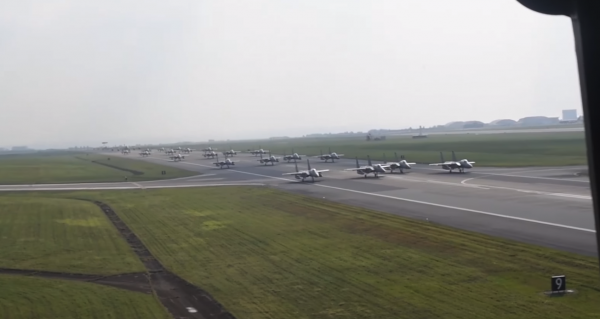 Elephant Walk during a no-notice exercise April 12, 2017, at Kadena Air Base in Okinawa, Japan. (AiirSource Military/YouTube)

The term “elephant walk” is a World War II-era term. When allied bomber operations consisted of 1,000 aircraft, their attacks were carried out in a single file, nose-to-fail fashion that resembled elephants traveling to the watering hole.

Like other close formation exercises, elephant walk exercises are performed to display the units’ capability and teamwork. It is often performed to prepare squadrons for wartime operations, as well as to prepare pilots for the launching of fully armed aircraft in one mass event. 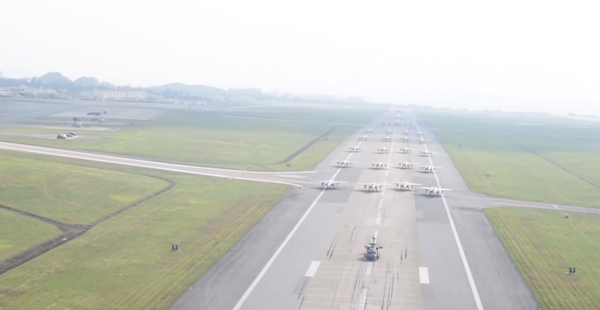 Elephant Walk during a no-notice exercise April 12, 2017, at Kadena Air Base in Okinawa, Japan. (AiirSource Military/YouTube)

In this video, F-15 Eagle fighter aircraft perform an elephant walk on the runway at Kadena.

Check out the elephant walk in action:

Although the elephant walk is performed primarily with fighter jets, the Air Force has also displayed everything from KC-135 Stratotankers, to helicopters, and even the C-130 Hercules.

Such an exercise is intended to be a show of force. It conveys the Air Force’s ability to deploy a large number of aircraft in a small period of time.

This exercise at Kadena Air Force Base, in particular, was conducted as a display in response to North Korea’s aggression in the region.

Kadena is considered a “Keystone of the Pacific” today. Its 18th Wing also plays a key role in deterring threats in the region.

“As the host unit at Kadena Air Base, Okinawa, Japan, the mission of the 18th Wing is to deliver unmatched combat airpower and a forward-staging base to provide sovereign options that promote peace and stability in the Asia-Pacific region, ensure the common defense of our allies, and enhance the United States’ unparalleled global engagement capability,” according to an Air Force fact sheet.

“As the largest combat wing in the Air Force, operating out of the largest Air Force installation in the Pacific, the 18th Wing is ideally suited to accomplish these critical objectives,” the fact sheet added.

(VIDEO) Learn All About The Career Of A U.S. Army Diver