(VIDEO) See the USS Gerald R. Ford underway on its own power for the first time

The USS Gerald R. Ford (CVN-78) is a leading United States Navy supercarrier. It’s the first of a new class of aircraft carriers named for the 38th United States President, Gerald Ford, who served in the Navy during World War II.

The new class of carrier is the first since USS Nimitz (CVN-68) in 1975, and the first new aircraft carrier introduced to the Navy since the USS George H.W. Bush (CVN-77) in 2009, according to the Navy.

“Ford-class ships will deliver greater lethality, survivability, and joint interoperability, along with unmatched versatility and compatibility with continuing joint-force transformation – all at a reduced operating and maintenance cost to taxpayers,” according to the Navy’s All Hands magazine.

Watch the video below to see the USS Gerald R. Ford in action:

It’s the largest aircraft carrier in the world, the largest warship ever in regard to displacement, which is 100,000 tons.

At a cost of $12.9 billion each, it’s also the most expensive warship in U.S. history.

“The next generation of aircraft carrier, the Gerald R. Ford class delivers unprecedented flexibility to the fleet. Due to a larger flight deck, the ability to host more aircraft, additional weapons and aviation fuel storage, and the Electromagnetic Aircraft Launch System and Advanced Arresting Gear, Ford will be able to increase sortie rates by one-third when compared to the Nimitz class,” the Navy statement said. 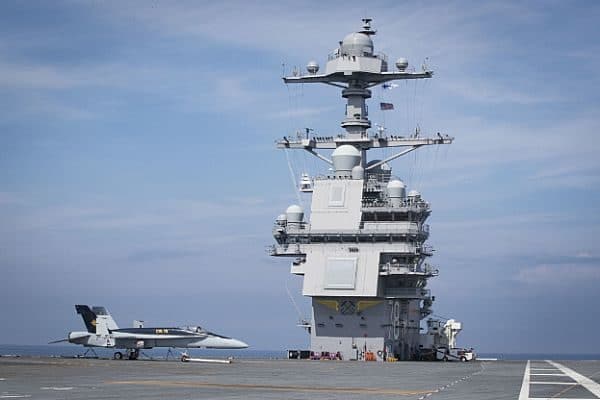 Shifting away from the traditional steam catapult system, the USS Gerald R. Ford introduces the Electromagnetic Aircraft Launch System (EMALS) to facilitate the launch of all carrier aircraft.

“The Navy’s newest aircraft carrier generates three times the amount of electricity as previous classes and is designed to rapidly add capabilities as new systems become available over the course of its projected 50-year service life,” the Navy statement said.

The carrier’s first deployment is expected to take place in 2022.

(VIDEO) A tribute to the longest serving US Navy supercarrier