Elvis Presley’s Extravagant Custom Handguns Are Up For Auction

Elvis Presley, the King, a true legend, remains a true American icon. Decades after his death, his valuables are still being auctioned off for huge amounts of money. The Rock Island Auction Company will be offering Elvis’ revolvers and other momentous pieces of memorabilia in their May 2017 Premiere Firearms Auction.

One of the King’s prize possessions up for bids is an extravagant, exhibition grade Smith & Wesson Model 19-2 along with all of the documents and receipts establishing its direct and unbroken line of origin. Elvis purchased this gun on November 6, 1970 and then he sent it to Friedrick Wilhelm Heym Co. in Germany for custom embellishment. 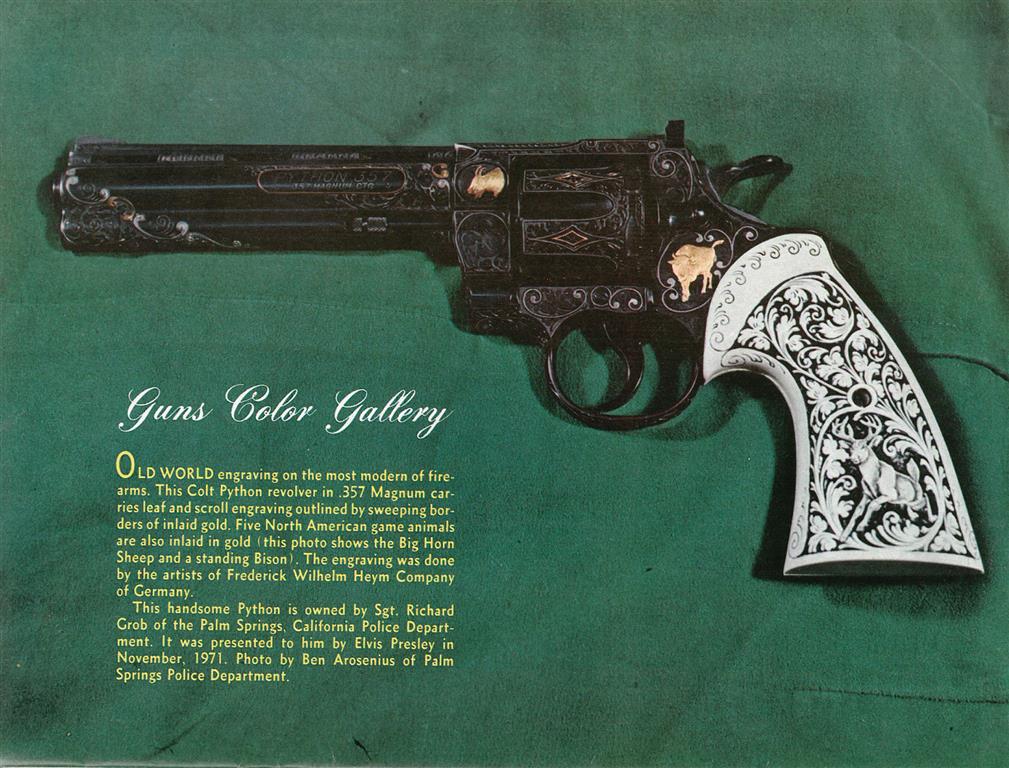 The gun was engraved with relief leaf and scroll engraving, gold and silver inlaid borders, and five incredible raised gold North American game animals. The staghorn grips have been elaborately engraved in a comparable vine and scroll design and also feature two engraved game animals. There is not a spot on the gun that is not decorated.

The King presented the decorated handgun to Vice President Spiro Agnew that same year but because the Vice President was under investigation for corruption at that time, he was only able to accept the gift for a short time and then had to return it to Elvis. But, he was still looking for someone to pass the very special gun to.

Elvis called on a favor from a local sheriff, Gene Barksdale. Some friends were going to be stranded at the airport and Elvis asked to have them picked up. The sheriff obliged and dropped the friends off at Graceland. That night, during a conversation about guns, Elvis presented the sheriff with the ornate gun. Later, the sheriff passed the gun onto his nephew and now he presents it to the Rock Island Auction Company.

That is not the only gem to be seen at the May auction. Elvis’ Colt Python will be amongst the treasures. The likes of this style of gun has increased rapidly. A fierce bidding war over this item would not come as a surprise. This Colt Python is accompanied by its original registration to the King. In 1973 it was featured in Guns Magazine.

The Colt Python is every bit as decorated as the Smith & Wesson Model 19-2 and all of the work was also done by Friedrick Wilhelm Heym Co. in Germany. The gun enjoys the same masterfully executed relief leaf and scroll engraving, silver and gold inlays abound, often serving as borders, and again five raised gold North American big game animals around the frame, accompanied by scrimshaw-esque grips and finished with extensive scrollwork outlining a leaping stag on one side and a pouncing mountain lion on the other. The auction runs from May 5-7, 2017.