The story about a hacker that reportedly took over 250 Twitter accounts run by proponents of the Islamic State and loaded them up with images of homosexual pornography recently popped back in the news and began going viral once again. The hacker, known as “WauchulaGhost,” spoke to CNN last year about the online escapade aimed at infuriating Islamic State militants who were spreading hatred against gays on the internet.

WauchulaGhost’s mission began in 2016, after terrorist Omar Mateen pledged his allegiance to ISIS before killing 49 people at a gay nightclub in Orlando, Florida.

WauchulaGhost tweeted in response to the article resurfacing.

“Morning World. Just FYI, the Sun article was based on a CNN article from last year. And Yes, I still have my head,” he tweeted, in response to the fact that his hacking mission last year left him with many angry messages from ISIS threatening to behead him.

“I get beheading images… death threats. ‘We’re going to kill you’ and that’s good because if they are focusing on me they are not doing anything else,” WauchulaGhost told CNN last year. 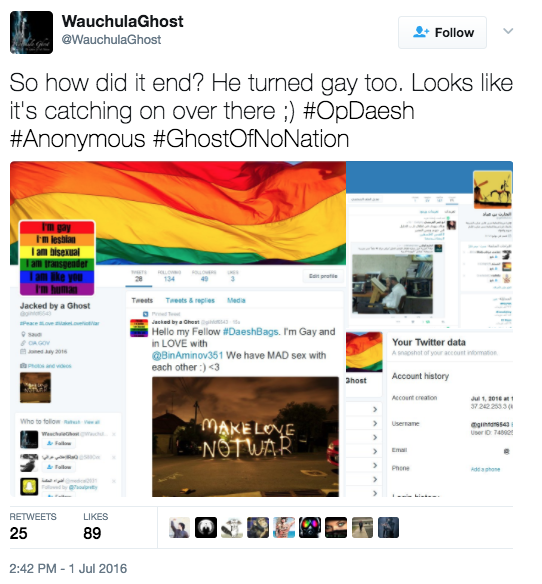 WauchulaGhost said that standing up to hatred on social media is helpful, and if the outlets themselves won’t do it, someone should.

“If the social media people like Facebook, Twitter and Instagram would stand up and do something it would help,” he said. “Sometimes you have to stand up and make a change for the good.”

He added that the mission was not to offend Muslims, but rather enrage those who are pushing hatred against homosexuals in light of the tragic terror attack.

“Daesh [ISIS] have been spreading and praising the attack, so I thought I would defend those that were lost. The taking of innocent lives will not be tolerated,” WauchulaGhost told CNN.

While insulting Islamic State members online, WauchulaGhost sometimes refers to the militants as “Daeshbags,” referring to ISIS by their official “Daesh” name.

You can watch the original CNN report below: