An assembly of 30 Senate and House Democrats brought a measure before the committee on Tuesday. Bill S.834, would fund research at the Centers for Disease Control and Prevention on firearms safety and gun violence prevention that would provide $60 million in funding annually to do research on guns. The program would begin in 2018 and last for six years.

The proposal is sponsored by U.S. Sen. Edward Markey D-Mass, and U.S. Rep. Carolyn Maloney, D-NY, with other Democrat and Independent lawmakers. 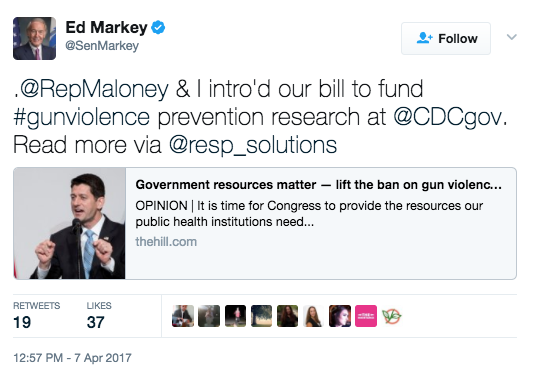 “Gun violence is ending lives and shattering families in Massachusetts and across our country,” Rep. Markey said. “Now more than ever we must study the causes of gun violence and what can be done to prevent it. No one should be afraid of more non-partisan, scientific research into this vital issue – not Republicans, not the NRA and not President Trump.”

If the measure is approved it would be the biggest subsidy for federal gun use research since a 1996 amendment by then-Rep. Jay Dickey, R-Ark. CDC funds would not be able to be spent on actions intended to restrict or control the purchase or use of firearms. Similar measures in 2014 and 2015 were introduced by never made it past the committee.

Gun violence kills more than 90 Americans and injures hundreds more each day, and yet it remains one of the most underfunded areas of public health research. The legislation introduced today would appropriate necessary and long overdue funds to the CDC to reclaim their leadership when it comes to gun violence prevention research – a role that has been decimated for more than two decades thanks to a relentless campaign by gun lobby-backed legislators.

Groups that support gun rights disagree, arguing that the country’s murder rate and fatal gun accidents have fallen dramatically in recent years even though gun sales have skyrocketed.