Thursday night the United States launched 59 tomahawk cruise missiles from the U.S. Navy warships USS Porter and USS Ross at a Syrian airbase located at Shayrat. The Trump administration believes that the base was the origination of the chemical gas attack which killed over 70 civilians. This is President Trump’s first major military action. President Trump said that the strike on Syria is “in the vital national security interest” of the United States. He addressed the nation Thursday night (full remarks below) stating how Syrian President Assad launched a chemical attack on his own people and that the U.S. must prevent the spread and use of chemical weapons. It appears that regime change is now a medium to long-term high priority for the Trump administration.

Here is a video of the missile strike: 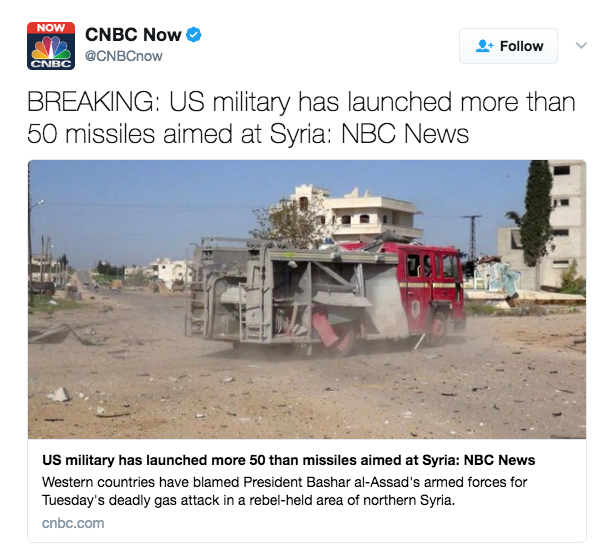 Syrian state TV is calling the attack an “aggression.” Russia was notified before the strike.

DEVELOPING – The United States launched dozens of cruise missiles at a Syrian airfield early Friday in response to a chemical weapons attack that killed dozens of civilians, the first direct assault on the Damascus government since the beginning of that country’s bloody civil war in 2011.

At least 50 U.S. Tomahawk missiles targeted an airbase at Shayrat, located outside Homs. It is believed that the base was used as a staging point for Tuesday’s chemical weapons attack on rebel-held territory, which killed as many as 72 civilians, including women and children.

The use of Tomahawk missiles meant that the strikes did not target air defense systems manned by Russian troops. The Assad regime is strongly backed by Russia and Iran.

US defense officials tell Fox that two warships based in the eastern Mediterranean, the USS Porter and the USS Ross, have been training for the past two days to execute this mission. 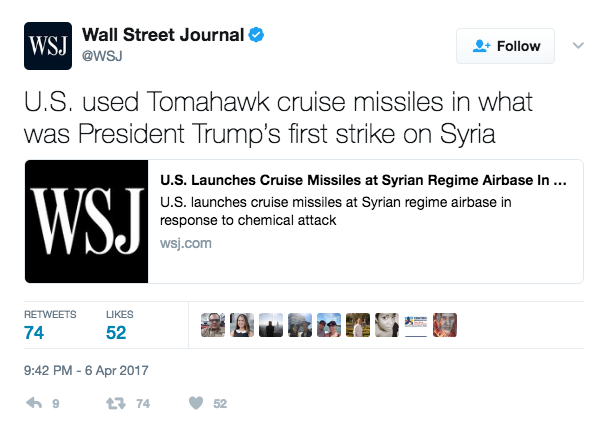 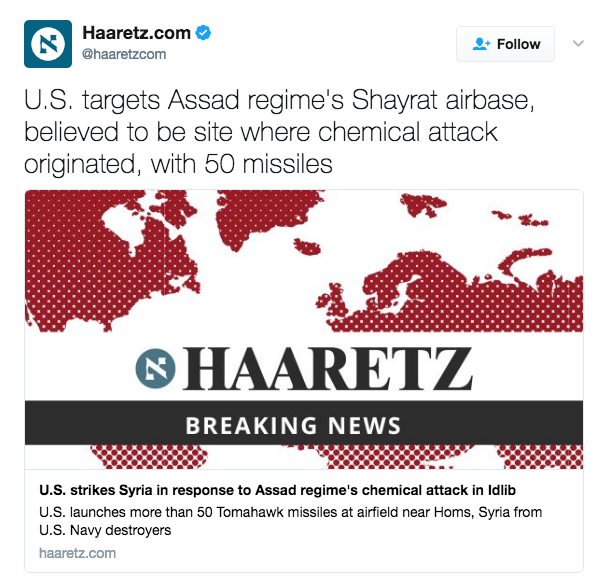 This week Bashar al-Assad launched a horrible chemical weapons attack on innocent civilians. Using a deadly nerve agent, Assad choked out the lives of helpless men, women and children. It was a slow and brutal death for so many. Even beautiful babies were cruelly murdered in this very barbaric attack. No child of God should ever suffer such horror.
Tonight, I ordered a targeted military strike on the airfield in Syria from where the chemical attack was launched. It is in this vital national security interest of the United States to prevent and deter the spread and use of deadly chemical weapons. There can be no dispute that Syria used banned chemical weapons, violated its obligations under the chemical weapons convention and ignored the urging of the UN Security Council.
Years of previous attempts at changing Assad’s behaviour have all failed and failed very dramatically. As a result, the refugee crisis continues to deepen and the region continues to destabilise, threatening the United States and its allies.
Tonight, I call on all civilised nations to join us in seeking to end the slaughter and bloodshed in Syria. Also, to end terrorism of all kinds and all types. We ask for God’s wisdom as we face the challenge of our very troubled world. We pray for the lives of the wounded and for the souls of those who have passed. We hope that as long as America stands for justice, then peace and harmony will, in the end, prevail.
Good night and God bless America and the entire world. Thank you.