On Tuesday, the Alabama Senate voted an astounding 25-8 to allow the concealed carry of handguns without a permit. This is a spectacular win for concealed carriers everywhere since this was not just a victory but more like a landslide. There are currently 11 states that allow public, permit less concealment. 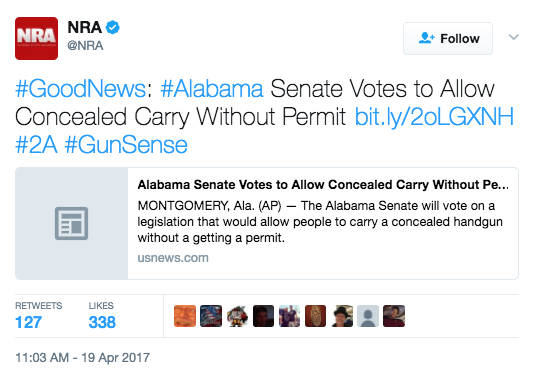 “It simplifies the ability for the average everyday citizen to understand what is legal and what is not legal while transporting that firearm,” Plus One Tactical Advantage gun store owner, Melissa Baisden, told WIAT.

“Many of (our) customers don’t understand the law, and if they leave here with a loaded gun without a permit and put it inside their vehicle they could possibly be subjected to criminal proceedings. If they get in trouble, or stopped by law enforcement they need to know the law, and this bill will help simplify things,” she continued.

The approved bill now moves to the house.

People like Melissa Baisden are elated because it recognizes a right to bear arms guaranteed to American citizens by the Constitution. It also addresses the government’s authority to regulate the matter.