The FBI Alaska SWAT Team were responding to a call of a domestic disturbance in Sept. 2016 and attempted to breach the front door of a home to search for an armed suspect.

A team of four officers is first spotted in a tight group behind a shield. The team slowly starts to move toward the front door, and make their first glaring error — they leave behind a service weapon. The rifle, likely an M4 or similar automatic variant, is left leaning against the neighboring home’s garage door, while all four members turn their back to it. 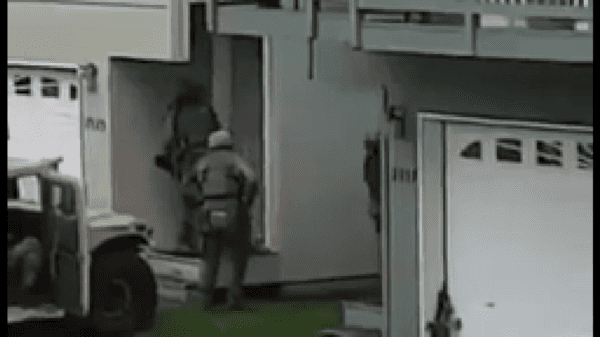 The officer with the battering ram steps out from behind the shield and takes aim at the front door. After two strikes, he slips on the wet front step and flies back into the SWAT vehicle.

He gets back up and starts swinging away again at the door, nearly falling again. After 14 strikes, the door is still not open. It’s merely loose at the top, but appears to be held up by a lower lock or door stop.

He finally hands the battering ram over to another officer.

Check out the ordeal below:

The next officer takes four strikes at the door and finally breaks it open.

For a moment, the officers stand around, seemingly confused as to what to do next. A few of them point their guns at windows on the home’s upper level. One officer paces back to the original position to retrieve an object from the ground — likely a flashbang — which he throws through the open doorway.

None of the officers make entry into the home.

Instead, all four officers retreat back to their original position — single file behind the shield. 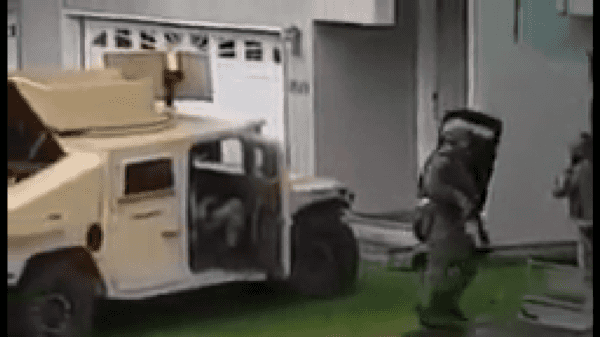 Throughout the entire ordeal, a fifth officer is sitting in the SWAT vehicle’s passenger seat with the door open. It’s not clear whether or not he is armed, or what his actual role is in the mission, but he never exited the vehicle for anything during the clip.

The video ends before a conclusion is achieved in this mission.

It leaves one to wonder about the training these officers received to display such a messy operation, and what came of the situation. On first impression, it looks like it could go down as one of the most epic SWAT fails.

Later reports confirmed that the officers were indeed of the FBI and deployed to assist the Anchorage Police Department in what was a 12-hour standoff with an armed, barricaded suspect, KTUU reported at the time.

The man was accused of assaulting his girlfriend, who managed to escape the home.

Negotiations with the suspect ran all throughout the day and were unsuccessful, resulting in the FBI breaching the home. Once inside, officers were able to peacefully detail the suspect without any shots fired or injuries.

See how US soldiers eliminate a Taliban ambush: 'Dude f**k that guy!'