The Act is also referred to as “Vietnam War Veterans Recognition Act of 2017.”

President Trump tweeted about the Act on Tuesday. 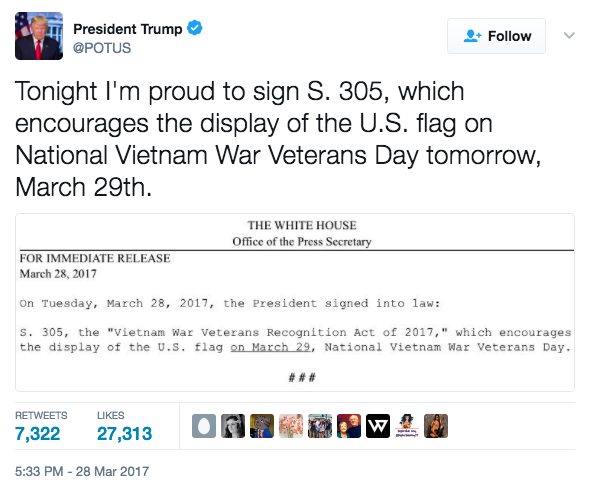 On Wednesday, Vice President Mike Pence also tweeted about the Act, commending the President for signing it into law and honoring Vietnam Veterans. 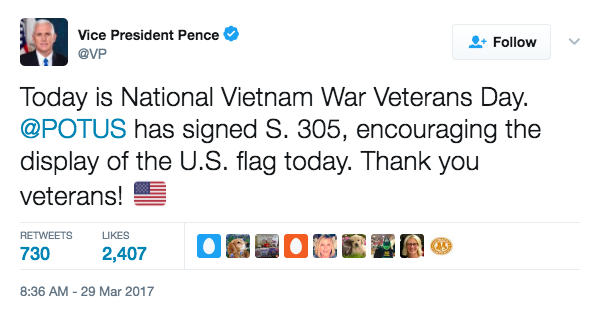 Senators Pat Toomey (R-PA) and Joe Donnelly (D-IN) co-introduced the legislation to honor Vietnam War vets each year on March 29. March 29 is the anniversary of the day when combat and combat support units withdrew from South Vietnam in 1973.

Sen. Toomey was quoted by the Olean Times Herald acknowledging that Vietnam War veterans were not always treated well when they arrived back home and were incredibly disrespected by those who disagreed with the war.

“Some of them were actually treated quite poorly,” he said. “And that was a tragic period in our history driven by people’s perceptions of the war. Fortunately, that, I think, is behind us now. And I hope and I believe we’ve gotten to a place where the American people realize how much we really should be grateful to the men and the women who served this country in Vietnam during that very, very difficult time.”

Toomey acknowledged it was a difficult time in U.S. history, but the sacrifice of the men and women that served should not be overlooked.

“They can learn about a difficult moment in the history of our country,” he added. “It was a very divisive moment. But, at the same time, teachers should be really stressing the tremendous sacrifice by the men and women who served in Vietnam.”