On Monday, U.S. Attorney General Jeff Sessions pushed to end sanctuary cities in the United States by threatening to cut federal funding to those who refused to comply with the administration’s immigration policies. In response, a handful of mayors from some of the nation’s most politically left-leaning cities spoke out that they would not go along with the new policies despite the threat of federal funding cuts and that they would vow to protect the cities’ “residents.” The mayors of Los Angeles, New York and Chicago were among those that said they were not planning on enforcing the nation’s immigration policies.

On Tuesday, Los Angeles Mayor Eric Garcetti said in a press conference that the Californian city would “fight to protect the safety and dignity of all Angelenos,” despite the fact that those living there illegally are not legal “Angelenos.”

“We will fight to protect the safety and dignity of all Angelenos, and we will work closely with our representatives in Congress to make sure that Los Angeles does not go without federal resources that help protect millions of people every day,” he said.

Garcetti argued that the Department of Justice that cutting grant funds would be “unconstitutional.” In recent years, the city has received about $1.8 million from the Edward Byrne Memorial Justice Assistance Grant Program to help fight gang crime.

During an unrelated news conference, Chicago Mayor Rahm Emanuel called the statements by Sessions “a bit of a joke.”

“I find it a little ironic. They said they were gonna cut or withhold monies on public safety. Did you look at the president’s budget that he introduced? He actually cut the Justice Department. So this is kind of like, in my view, a bit of a joke in that sense,” Emanuel said.

New York City Mayor Bill de Blasio went as far as calling the Trump administration “overzealous” and accused them of “xenophobia and division.” 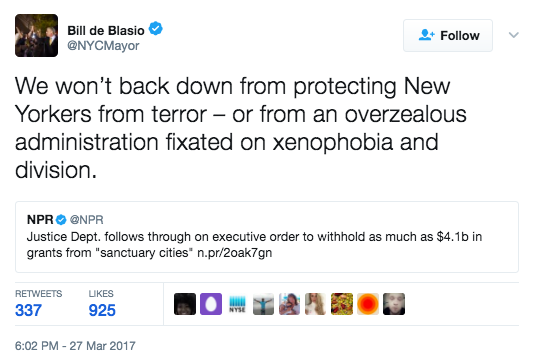 “We won’t back down from protecting New Yorkers from terror – or from an overzealous administration fixated on xenophobia and division,” de Blasio tweeted.