On Thursday, President Donald Trump reached out to the oldest living Pearl Harbor survivor on his birthday to tell the 105-year-old to “keep going!” Trump sent his birthday wishes to San Diego resident Ray Chavez in an official White House letter that was tweeted out by White House Press Secretary Sean Spicer. 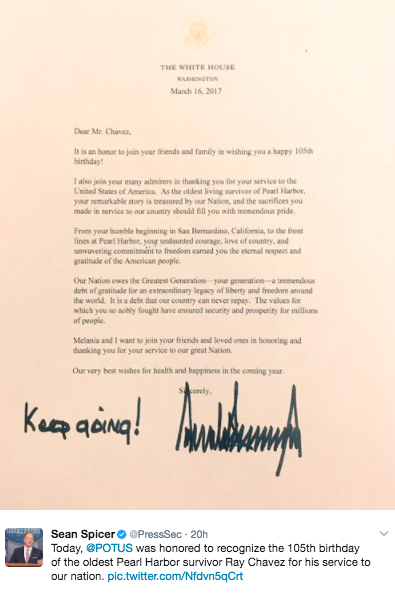 “It is an honor to join your friends and family in wishing you a happy 105th birthday,” Trump wrote. “I also join your many admirers in thanking you for your service to the United States of America.”

“As the oldest living survivor of Pearl Harbor, your remarkable story is treasured by our Nation, and the sacrifices you have made in service to our country should fill you with tremendous pride,” the President added.

“From your humble beginning in San Bernardino, California to the front lines at Pearl Harbor, your undaunted courage, love of country and unwavering commitment to freedom earned you the eternal respect and gratitude of the American people.”

At the bottom of the letter, President Trump signed his name and wrote in marker “Keep going!”

Chavez told NBC News that these days his birthday is an “annual miracle.”

“Somebody upstairs is taking care of me and has extended my life this long and I’m very grateful, he said.

NBC News met Chavez while at the 75th commemoration of the attack of Pearl Harbor. He told them that his motto for a long life was “survival of the fittest” and that he continued to work out twice a week with a trainer. For his birthday on March 10th, he worked out with his trainer before having cake with friends. On Saturday, a celebration was held for Chavez at the USS Midway which is now a museum.

“It’s been surprising because I didn’t expect so many people,” Chavez to NBC News.

The celebration consisted of a concert, speeches, and hundreds of party goers. A letter from former President George H. W. Bush was read aloud and said: “This former World War II veteran and former Commander in Chief salutes you.”

Watch a video put together by the U.S. Navy about Ray Chavez below: