On Monday, Yonhap, a South Korean news agency reported that U.S. and South Korean troops will be taking part in a joint military exercise “to practice incapacitating North Korean leadership in the case of conflict.” The joint forces team, which includes U.S. forces such as SEAL Team Six, will participate in “Foal Eagle and Key Resolve” exercises, which includes the “Soaring Eagle” exercise aimed at enhancing “the ability to shoot down enemy missiles and strike core military facilities in North Korea.”

“The U.S. Navy SEAL Team Six will join the annual Foal Eagle and Key Resolve exercises between the two allies for the first time, along with the Army’s Rangers, Delta Force and Green Berets,” Yonhap reported.

“A bigger number of and more diverse U.S. special operation forces will take part in this year’s Foal Eagle and Key Resolve exercises to practice missions to infiltrate into the North, remove the North’s war command and demolition of its key military facilities,” a military official told Yonhap News Agency under anonymity. 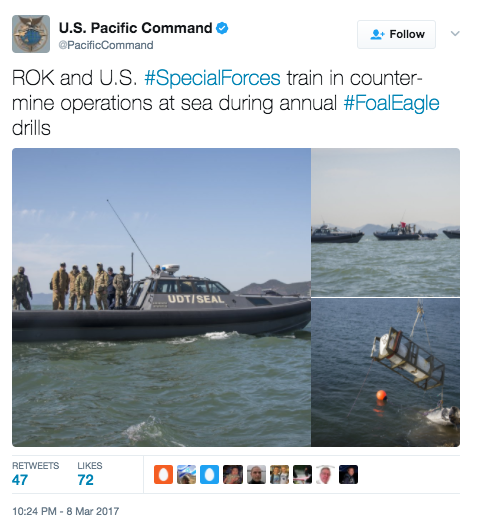 “The Soaring Eagle exercise is designed to practice the Air Force’s readiness against possible provocations from North Korea and counterattack operations,” the Korean Air Force said in a statement, according to the Korea Times.

“By carrying out the exercise in tandem with Key Resolve, we expect the ROK Air Force to enhance its combat capability in the event of war,” the statement continued.

The Korea Times reported that Soaring Eagle “involves 50 aircraft including F-15Ks, KF-16s and FA-50s fighter jets as well as 500 troops.”

Korea’s JoongAng Daily also reported earlier this month that F-35s would be taking part in the simulations as well.

Both Seoul and Washington reportedly said the drills were solely defensive, but Pyongyang has “denounced them as rehearsal for an invasion.”

North Korea’s Korean Central News Agency, the country’s state-run news agency, reported that the North was calling on “compatriots in South Korea and overseas” to protest the drills.

“South Korea should understand that all the military exercises it holds with the U.S. is like dancing with a powder-flask whose ignition has been lighted and that such an act will bring nothing good to the nation,” the KCNA said.