On Monday, U.S. officials reported that at least three U.S. soldiers were injured by an explosion in Jalalabad, Afghanistan. The soldiers were in a mine-resistant vehicle as part of the NATO-led Resolute Support mission when the vehicle struck an Improvised Explosive Device (IED). According to Stars and Stripes, the Islamic State has claimed credit for the IED. 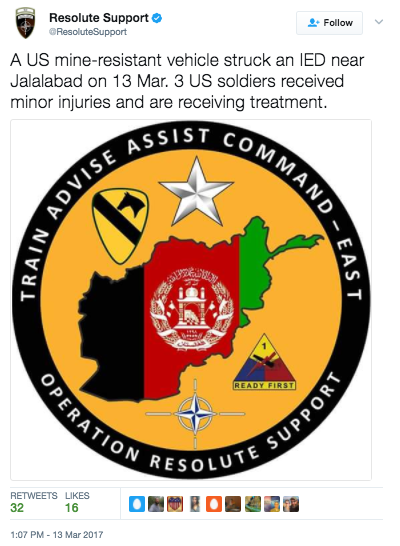 “A US mine-resistant vehicle struck an IED near Jalalabad on 13 Mar. 3 US soldiers received minor injuries and are receiving treatment,” Resolute Support tweeted.

NATO also released a statement saying that three NATO soldiers were injured when their vehicle hit an IED. The U.S. is supporting the NATO-led Resolute Support Mission in Afghanistan.

“Three soldiers sustained minor injuries and have been returned to duty,” the statement said.

According to Stars and Stripes, “the soldiers were returning to Forward Operating Base Fenty at Jalalabad Airport after an unspecified mission when their mine-resistant vehicle ran over the IED.”

Stars and Stripes also reported that officials stated that a fourth soldier in the vehicle was not injured by the explosion and that the Islamic State-Khorasan Province claimed responsibility for the bomb.

Following the completion of the mission of the International Security Assistance Force (ISAF) at the end of 2014, a new, follow-on, NATO-led mission called Resolute Support was launched on 1 January 2015 to provide further training, advice and assistance for the Afghan security forces and institutions. At the NATO Summit in Warsaw, Allied leaders decided to extend the presence of RSM beyond 2016.

NATO Senior Civilian Representative in Afghanistan, Ambassador Maurits R. Jochems signing the Status of Forces Agreement on behalf of NATO
Some 13,000 personnel from NATO member states and partner countries are deployed in support of the Resolute Support Mission (RSM). The mission operates with one central hub (in Kabul/Bagram) and four spokes in Mazar-e Sharif, Herat, Kandahar and Laghman.

The legal framework for RSM is provided by a Status of Forces Agreement (SOFA), which was signed in Kabul on 30 September 2014 by the Afghan President and NATO’s Senior Civilian Representative to Afghanistan, and later ratified by the Afghan Parliament on 27 November 2014. The SOFA defines the terms and conditions under which NATO forces will be deployed in Afghanistan as part of Resolute Support, as well as the activities that they are set to carry out under this agreement.

The United Nations Security Council welcomed the Resolute Support Mission with the unanimous adoption on 12 December 2014 of Resolution 2189, which underscores the importance of continued international support for the stability of Afghanistan.

Beyond the training, advice and assistance mission, Allies and partner countries are committed to the broader international community’s support for the long-term financial sustainment of the Afghan security forces until the end of 2020 .

The meaning behind the tradition of leaving coins on veterans' gravestones