Mat Best offers a solution to those who are the forefront of the gun debate: the assault pillow. (MBest11x/YouTube)
February 21, 2017 Wade Bennett
Share
Tweet
Flip

When it comes to guns, the media often presents ill-informed and biased perspectives. From incorrect descriptions of guns and laws, to proposals for unconstitutional bans and questionable limitations, uninformed opinions from media figures are frequent and unchecked. However, informed gun owners quickly pick up on these this misinformation, and sometimes, hilarity ensues.

In an opening schtick meant to poke fun at folks who likely have never experienced a gun before, the men act extra scared around a rifle and conclude that it has “mind control” powers when the “bullet button” is pressed.

Check out the hilarious video below:

“That’s the thing about guns as you can see, you just never know when it’s going to start shooting us,” Best jokingly says in the video.

The gun is “fired” at the ceiling as over-the-top gun sound effects go off with the men screaming in horror.

“What just happened?! I think it has mind control,” Hafer concludes.

“It absolutely has mind control. It’s a death machine!”

In the hopes of replacing the weapons with something more viable, Best and his friend offer the assault pillow as a safe way to combat threats.

“This is absolutely a non-discriminating system, so it covers absolutely every spectrum,” the men explain as they show off a crudely drawn assault rifle on a pillow.

“You can fight back, like, super hard with this. Bam bam boom get back terrorists,” Hafer mocks. 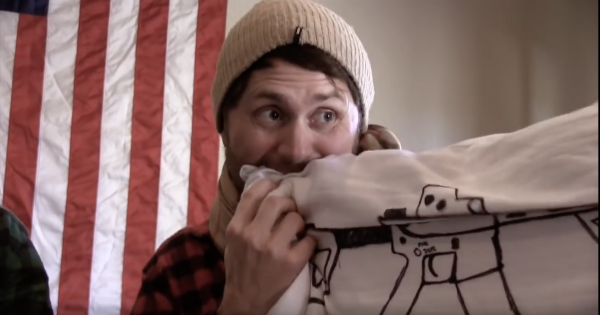 In addition to being the perfect weapons, the assault pillow also serves as a stress reliever.

“If you get inundated with stressful situations, then you just bite down on the corner.”

The video is an amusing take on the politically correct gun control culture of today, with Best and Hafer portraying the uninformed hipsters that are often a prominent voice of gun debates. Fortunately, the “hipsters” in the video come to their senses at the end after drinking some Black Rifle coffee and offer some friendly advice.