It’s no secret that a healthy rivalry exists between the various branches of the United States Military. While they are all part of one force protecting America’s freedoms, they often bag on one another for the idiosyncrasies each branch is known for.

Check out YouTuber Mat Best and his friends as they perform a rap battle between the Marines and the Army:

The rap battle begins with a few pretty intense verses about the Marine Corps.

“I invade you occupy let’s get that straight,” the rap song goes. “But I know why you’re upset, cause you Ain’t Ready to be a Marine Yet.” The lyrics on screen highlight the A-R-M-Y to make the verse particularly creative.

Not be outdone, the Army fires back with their rebuttal:

“I got the baddest men on the planet, USASOC. I’m the greatest force in the world, you must admit. Someone forgets a haircut and you throw a fit.”

While no official winner of the rap battle is declared, each soldier certainly held nothing back with their lyrics.

Of course, the rap battle is all in good fun. At the end of the video, the Army soldier and Marine take out an “ISIS terrorist” together and decide to get a beer afterwards.

Best also says that he of course has nothing but love for all branches of the United States military. 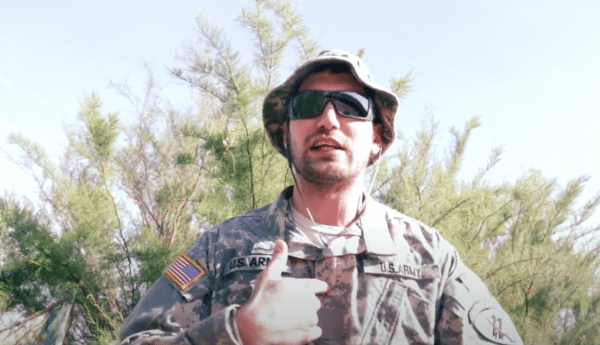 Best’s YouTube channel, MBest11x, has amassed more than 1.3 million subscribers who have watched his content some 200 million times. Best has been uploading videos to his channel for more than 10 years. His dozens of videos include comedy sketches, weapons tests and military tributes.

A veteran himself, Best is a former United States Army Ranger. He joined the Army shortly after graduating high school. He eventually served five deployments with the 2nd Ranger Battalion before working as a private contractor for Gate Guard. His work involved contracts with the Central Intelligence Agency.

More recently, Best published a book that serves as a memoir of his military service.