On Wednesday, Breitbart Technology editor Milo Yiannopoulos was scheduled to speak on the University of California Berkeley campus but the event was canceled after violent protests broke out from rioters outside the venue. To revolt against his appearance, student activists assaulted individuals, lit fires, destroyed property, and used smoke bombs to shut down the event. 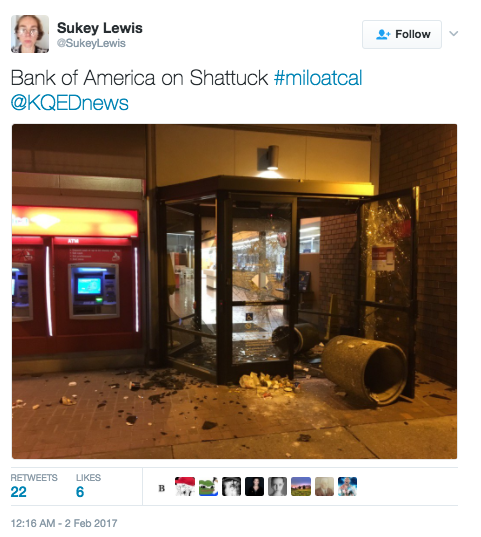 About 1,500 people showed up at protest Yiannopoulos, but university officials said about 150 “masked agitators” were responsible for the violent behavior.

At least six people were injured as masked demonstrators used violence against those who were there to either attend the event or support Yiannopoulos from the outside. Rioters were caught on video beating a Yiannopoulus fan unconscious in the street:

The aggressive protestors tried blocking traffic, and one driver who was caught in the pedestrian ambush continued to drive through the individuals to get to safety:

The violence continued as protestors destroyed Bank of America ATMs on campus:

A Yiannopoulos fan outside of the venue was giving an interview when one of the “masked agitators” pepper-sprayed her in a surprise attack:

Yiannopoulos made a statement on Facebook and posted a video to YouTube after the event was canceled.

“I have been evacuated from the UC Berkeley campus after violent left-wing protestors tore down barricades, lit fires, threw rocks and Roman candles at the windows and breached the ground floor of the building,” he said. “My team and I are safe. But the event has been cancelled. I’ll let you know more when the facts become clear. One thing we do know for sure: the Left is absolutely terrified of free speech and will do literally anything to shut it down.”

Milo noted how he was evacuated by his security personnel as well as campus police at the first sign of trouble. He also noted how the police seemed to have a “sit back approach” and weren’t too aggressive in shutting down the violence before it happened.

U.C. Berkeley has been named the birthplace of the “Free Speech Movement” which took place in 1964. During the peaceful protests, students pushed for the university to lift the ban they had placed on political activities on campus which were in violation of the students’ right to free speech. Many, including Yiannopoulos, having noted the irony in the protests on Wednesday as the total antithesis of the Free Speech Movement that happened on that very campus in the 60’s. 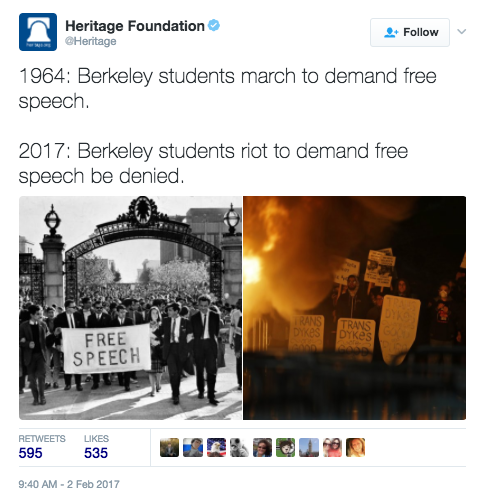