On Tuesday, a meeting between France’s far-right presidential candidate Marine Le Pen and the Lebanese grand mufti was canceled after Le Pen refused to wear a headscarf during their talk. Le Pen, the President of France’s Front National Party, had been on a two-day tour of Lebanon looking to boost the number of possible Franco-Lebanese votes before the April election.

Le Pen’s meeting with Grand Mufti Sheikh Abdul Latif Derian was scheduled to happen following her meeting with Lebanon’s Christian President Michel Aoun and Lebanon’s Sunni Prime Minister Saad al-Hariri on Monday. The grand mufti is the leader of the Dar al-Fatwa, the top religious authority for Sunnis in Lebanon.

Le Pen told reporters that she had met with the grand mufti of Al-Azhar Mosque in Cairo in 2015 and did not have to wear a headscarf.

“I met the grand mufti of Al-Azhar,” Le Pen said. “The highest Sunni authority didn’t have this requirement, but it doesn’t matter.

“You can pass on my respects to the grand mufti, but I will not cover myself up,” she continued.

The mufti’s press secretary, Khaldoun Awas, told CNN that he was the individual who was tasked with handing Le Pen the headscarf that she refused to take, despite being warned ahead of time that it would be required.

“I personally greeted her at the door of the Edict House and wanted to hand her a white headscarf that was in my hand, she refused to take it,” Awas said.

“I urged her to put it on, she refused and said she would not put it on and walked out without attending the previously agreed upon meeting with the mufti. The Edict House regrets such inappropriate behavior at such meetings,” he continued.

The vice president of the Front National Party Florian Philippot tweeted after the cancelation of the meeting, praising Le Pen for her feminism. 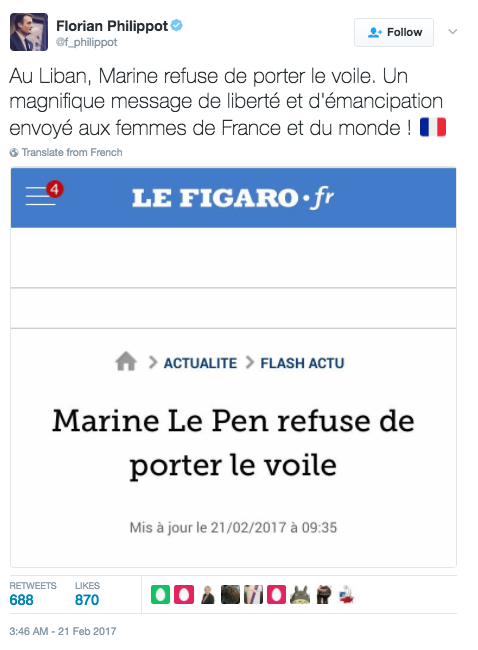 “At the Lebanon Marine refuses to wear the veil. A beautiful message of freedom and emancipation sent women to France and the world!” Philippot said.