WATCH: The 10 largest explosions of all time

Explosions, both natural and man-made, can result in mass destruction in a matter of seconds. Often times, the biggest explosions can cause enough devastation that the effects can be felt for generations. Cities are reduced to rubble, lives are lost in an instant and the earth is left with a permanent scar from a single moment of unfathomable energy.

In an attempt to rank some of the biggest explosions of all time, Top Lists offers a glimpse at the most memorable and catastrophic events in the earth’s history. Whether they’re the result of war, science, accidents, or other events, each explosion is unique in its own right.

The list starts off with the 1917 Halifax explosion, a maritime disaster in Halifax, Nova Scotia, Canada. A Norwegian vessel, the SS Imo, crashed into a French cargo ship, the SS Mont-Blanc, which was carrying explosives. The crash caused a massive detonation equivalent to some 2.9 kilotons of TNT, and it was considered the largest man-made explosion at the time.

Nearly all structures within a half-mile radius were destroyed, and entire cities were obliterated. It is estimated that around 2,000 people died as a result of the explosion and ensuing fires in nearby towns. Another 9,000 people were injured.

Check out the rest of the list in the video below:

While some explosions are a result of nature or accidents, many of the most devastating have been purposely executed. The most powerful man-made nuclear weapon ever created, the Russian Tsar Bomba, was tested on Oct. 30, 1961.

The resulting explosion from the Tsar Bomba was the equivalent of 50 megatons of TNT. A 35-mile high mushroom cloud could be seen from hundreds of miles away, and buildings and structures were inadvertently damaged because of the test. To this day, the Tsar Bomba remains the largest man-made explosion to ever occur. 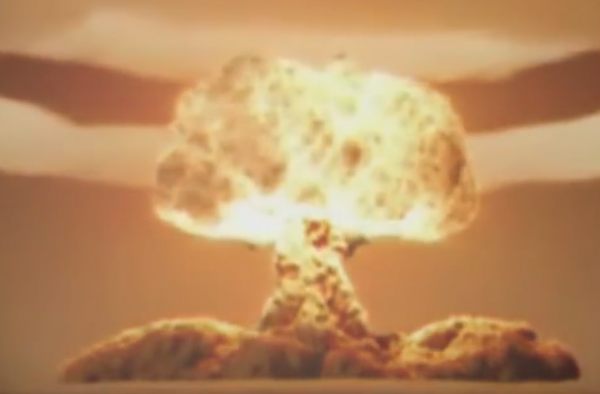 Perhaps the most impactful man-made explosion of all time, the United States’ decision to drop the atomic bomb Little Boy on the Japanese city of Hiroshima remains one of the most controversial decisions in recent history.

Three days later on Aug. 9, 1945, the U.S. would drop an additional nuclear bomb over Nagasaki. To this day, these have been the only atomic weapons ever used in war.

Little Boy, an atomic bomb dropped on the Japanese city of Hiroshima on  August 6, 1945, exploded with the energy equivalent of 16,000 tons of TNT. (Top Lists/YouTube)

Topping off the list is the Cretaceous–Paleogene (K–Pg) extinction event, which is said to have been the direct result of a comet or asteroid impacting the earth 66 million years ago. The effects of the impact can still be seen today, and researchers propose that the event led to the extinction of three-quarters of the plants and animals on the planet.