Watch the intense process of loading an A-10 with ammunition

The A-10 Thunderbolt II, lovingly nicknamed the Warthog for its unique look, packs a punch with rockets, missiles and an extremely capable 30mm GAU-8 rotary cannon all at the pilot’s disposal. With a maximum capacity of more than 1,300 rounds and a firing rate of of more than 3,000 rounds per minute, the aircraft goes through ammo in the blink of an eye.

And reloading those weapons is a process in and of itself. A multi-man team is required for such a task, and the whole process of getting thousands of rounds of ammunition inside the jet is quite the sight to behold. 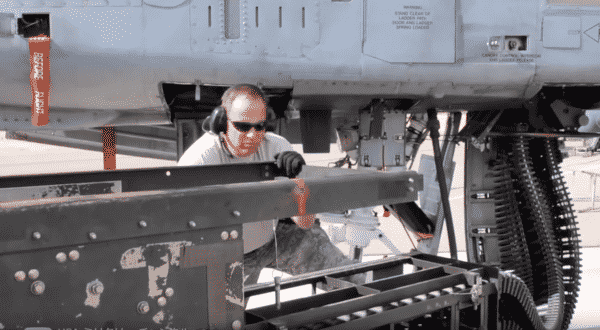 A video posted to YouTube by the USA Military Channel documents the intense reload procedure which consists of a minimum of three personnel at any given time. Even more troops can be seen throughout the video managing and preparing the ammo and conducting other routine maintenance on the aircraft.

Check out the Warthog getting all its service done in the video below:

The first part of the video shows a team reloading the rotary canon on the underside of the plane. A massive string of ammunition is brought in on its own separate cart and wheeled up to the Warthog.

The skilled men must feed the ammunition at the underbelly of the jet through an access point. Once the ammo is connected to the aircraft, the cart that was rolled in finishes the job as it pushes up hundreds of rounds of ammo automatically. 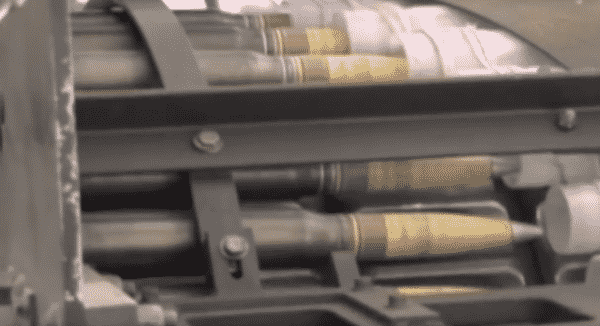 The ammo that gets loaded in to the Warthog must also be properly inspected. A tedious job that requires a number of crew members at once, the video also shows that process as well.

The soldiers sift through the rounds to ensure there are no gaps or issues, which is certainly a critical step in reloading the aircraft. 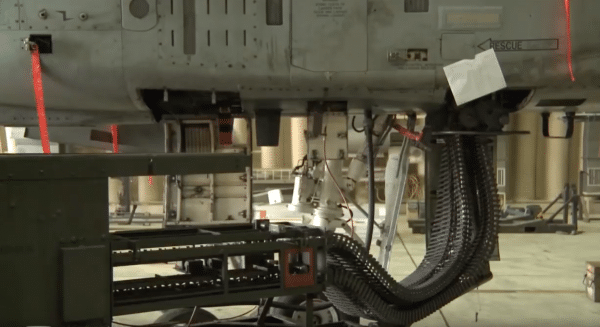 The A-10 Thunderbolt is one of the longest serving aircraft in the United States Military’s fleet. Original introduced in 1977, there are now more than 700 Warthogs in use around the world.

Following a number of recent upgrades and improvements, the Warthog will remain active until at least 2040.