It’s probably safe to say that most veterans have a pretty good sense of humor. With everything they’ve been through, sometimes laughter and jokes are the best way to get through the bad times.

However, everybody as a limit, and the guy in this video definitely pushed it.

These pranksters had a plan to break into this soldiers house in the wee hours of the morning while he was getting ready to head to reserve training. When the soldier in the home heard someone climbing through the window his reactions kicked in and, well, you can imagine it didn’t go so well for the prankster. 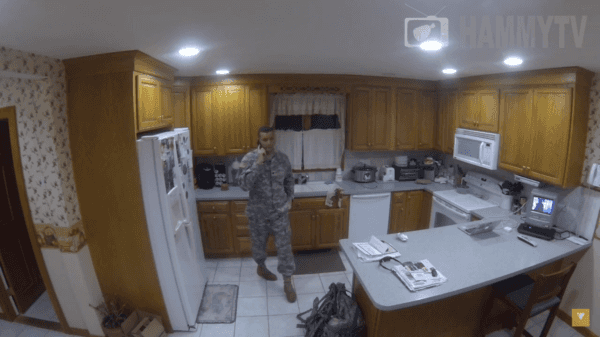 This guy’s lucky he only got whacked with a keyboard. This could have gone much, much worse.

In the end, the lesson is simple… don’t try to prank a vet.

As the pranksters in the video point out, their target, Ryan, hates mornings and on this particular morning he has to wake up early for Army reserves. His best friend had the bright idea of seeing what would happen and see how Ryan would react if he dressed up, acted like a home invader and broke into his house.

Ryan’s mom allowed the cameraman access to the house so that several cameras could be hidden at specific points in the house that would be able to capture every angle of the house including the kitchen and the living room so that nothing entertaining would be captured off camera.

The plan is for Ryan’s friend is to break in through one of the windows with a prop gun in his hand.

As Ryan’s friend opens one of the windows to the house, the window creaks. Ryan hears a strange noise coming from another room in the house and decides to investigate to see what the noise was and where it came from.

Ryan grabs the prop gun from his friend and starts to drag him to the center of the room. That’s when his friend realizes he has had enough of a beating and takes his mask off.

After realizing it is his friend behind the mask, Ryan exclaims, “Dude, it’s five in the morning. You’re an idiot.”

So much for getting even.