Madeleine Albright: “I Stand Ready To Register As Muslim”

On Wednesday, former Secretary of State Madeleine Albright announce on Twitter that she was “ready to register as Muslim” as a protest against President Donald Trump’s latest executive order. Trump announced that he plans to put a temporary halt on refugees coming from nations in the Middle East and Africa that are breeding grounds for terrorism until the United States can develop a better vetting system to weed out the Islamic extremists.

“I was raised Catholic, became Episcopalian & found out later my family was Jewish. I stand ready to register as Muslim in #solidarity,” Albright tweeted.

“There is no fine print on the Statue of Liberty. America must remain open to people of all faiths & backgrounds. #RefugeesWelcome,” she said in another tweet, and included a picture of the Statue of Liberty accompanied by the Emma Lazarus quote that is inscribed inside the statue’s pedestal. 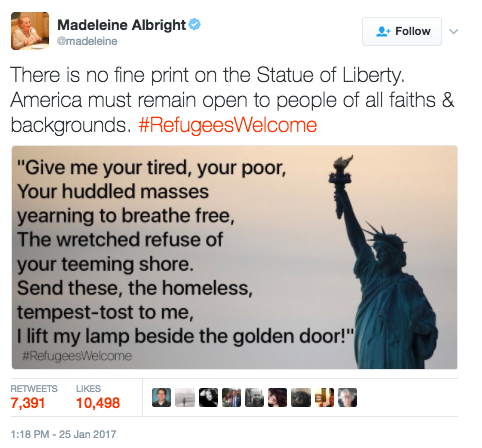 The Associated Press obtained a draft of the executive order that inspired Albright to make such a statement. The AP reported that the order from Trump intends to suspend the U.S.’s broader refugee program 120 days. The order also intends to stop issuing visas for people from Iran, Iraq, Libya, Somalia, Sudan, Syria, and Yemen for at least 30 days.

The draft also includes a section that allows the U.S. to admit people into the country on a case-by-case basis while the entire program is on halt. Those claiming religious persecution would be considered for exemption.

The order is expected to be signed Thursday.