Former Playboy bunny turned political activist Pamela Anderson issued a statement to People Magazine calling for WikiLeaks co-creator Julian Assange to be released. Assange has been residing at the Ecuadorian Embassy in London after claiming Diplomatic Asylum in 2012. Assange has remained in the embassy for fears that he will be extradited to Sweden for an alleged sexual assault that took place in August 2010. He is free to leave the embassy at anytime. However, United Kingdom police are under orders to arrest and extradite him to Sweden if he leaves the compound. 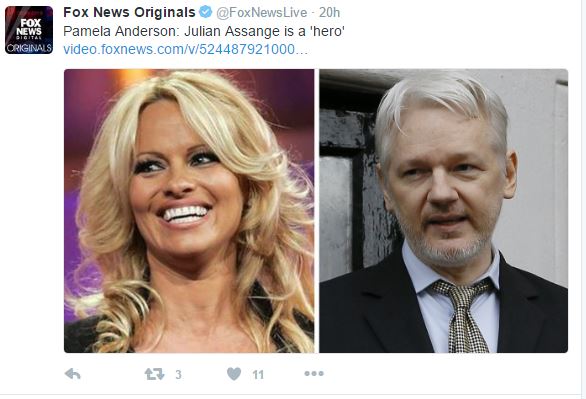 Anderson made the mistake of claiming Assange is being held against his will despite visiting him at the embassy several times. Anderson told People Magazine:

“[Assange] is a hero, One day everyone will realize. But until now, this man has missed seven Christmases with his children and is kept in difficult and tremendously stressful conditions-while doing us all a great service. Everyone in the world has benefited because of WikiLeaks — he has sacrificed so much — to simply share the truth.”

Assange is also concerned that, if he leaves the embassy, he will be extradited from Sweden to the Untied States for his role in the 2016 Presidential election. During the election WikiLeaks published hacked emails from the Democratic National Committee and Hilary Clinton aid John Podesta.

Anderson is also calling for the freeing and pardon of Edward Snowden and Chelsea Manning.