This is the second part in a series highlighting U.S. Veterans fighting in the Kurdish Militia.

It’s safe to say that to the average man, the idea of war is a foreign concept; something civilians are protected from by clean cut, uniformed soldiers sporting crisp haircuts and a love of all things American. Some men taste the thrill of battle once and live the rest of their lives haunted by the experience. Other men, created from the shambles of a broken life, find nothing but solace in its embrace.

And their reality is death. They will die in war torn fields, soaked in blood far away from the towns and cities that birthed them. There will be no flag covered coffins lowered gently at Arlington. Their names will only be whispered by the few lucky enough to know of the sacrifices they made to keep the wolves at bay.

I recently spoke to Justin Schnepp, whose own story, much like the many others he finds himself fighting alongside, is wrought with pain and failure. A talented U.S. Soldier who fought in Iraq as a Sniper finds himself in the ruins of another town along the Syrian border, waiting to move out in the morning. He started by telling me a little about life before the war.

“I’m from a place called Port Huron Michigan, right near the border of Canada. I grew up lower middle class; well more low than middle I suppose. I had very hard working parents, so I never really went without. I would say things started heading down hill in middle school.”

Most would agree middle school is a pretty rough time for any kid, but it was certainly true for Justin. In June of 1999, just two months after the infamous Columbine shooting, Justin and a friend, both 14 at the time, were arrested and tried as adults for joking about bringing guns to school. After what amounted to a kangaroo court, the Judge decided to throw the book at the pair in lieu of the events at Columbine, despite neither teen having committed any acts of wrongdoing. It was eventually knocked down further and further, getting all but erased from his record, allowing him to join the Army.

“I had to fight to get a waiver with my criminal history, and I guess I can thank the surge into Iraq for getting my foot in the door at all.” 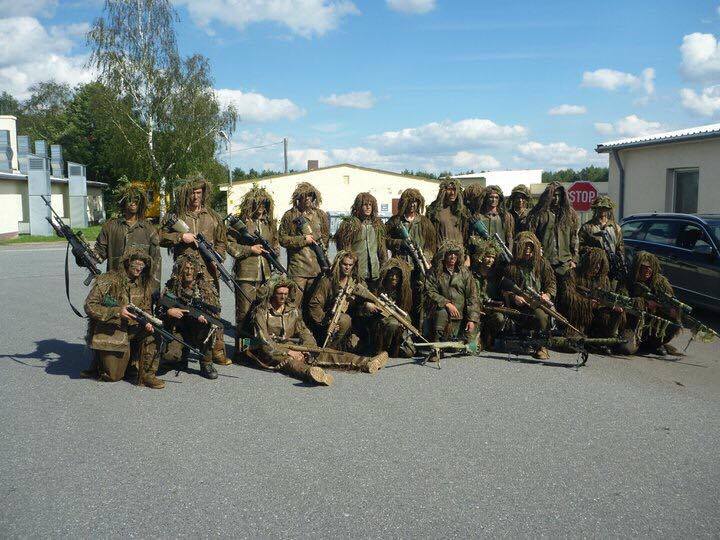 Not long after, in July of 2005, Justin became a U.S. Soldier. He left for Germany in January of 2006 and joined the 1st Battalion 18th Infantry. He was quickly assigned to a Sniper platoon, and in September of 2006 headed into Iraq for his first deployment.

“I spent 15 months in Ramadi, and returned to Germany around November 2007. Went to Sniper school, Mountain Warfare School, the whole nine yards. I was doing great, excelling at everything I was doing. Three days before deploying to Iraq in November 2008, I married a girl I had known for a short time, who was already pregnant with my son. Twelve months of combat and one day, just like that, I’m home.”

But life wasn’t easy after stepping off the plane. Justin came from a year immersed in war, to being a new husband and a father to a young son virtually overnight. Thoughts of war and combat weighed on Justin’s mind, and like many warriors before him he turned to alcohol.

“I was drinking all the time, and continued to drink by myself long after everyone had gone to bed.” Unable to cope with his addiction, and after failed attempts at rehab, the Army decided to show him the door in August of 2011.

“I had about 20 letters of recommendation from guys I had served with over a 6 year career. Company Commanders, 1st Sergeants, Platoon Sergeants, just about everyone. But we had a new chain of command and he decided to make an example out of me. I don’t think he bothered to read one single letter of recommendation.”

“When I got out I rented an apartment and started going to college. I was at work one day when I saw a story on the television about ISIS taking over parts of Iraq; I think this was late 2014. I met a guy online, who had been over twice, and he got approval for me to join, but it’s all on your own dime and I couldn’t afford the flight. Around this time, a producer from MTV contacted me. They wanted to run a story about my arrest in middle school, but I told them about my plans to join the YPG, and told them I was just waiting until I had the money and I’d be heading over. But it was a slow process, my drinking was getting really bad and I was working two part time jobs to make ends meet.” But, he said, “I did it.”

From the U.S to Sweden, all the way to the Middle East, the journey is not a short one and it is not for the faint of heart. For the safety of many involved in getting him there, I have omitted the exact process that gets one from U.S. soil to the modern day battlefields in Syria and Iraq. I asked him what his plans were for the future, and he looked reluctant to answer.

“When I left the Army I was crushed. It was the best I had ever been at something. For now, I will be here as long as the battle takes, and I hear it could take a while. If I live to see unification for the Kurds, maybe I’ll head to Burma or the Ukraine and fight there too. Only time will tell.”

There’s a world of options for a man with nothing to lose and no place to call home. With so many political factions fighting, the need for men with Justin’s skill set rises daily. Around the globe, proud men with warrior hearts band together to face evil wherever they encounter it. We cannot look down on them or judge the morality of their decisions, only thank them somberly for keeping us safe for one more night. As he signs off I feel lucky to have met Justin Schnepp, and share the legacy of another American on his journey of peace through war.

Joshua Raymond-Castro is a freelance journalist, activist, blogger and U.S Marine Veteran. He currently studies writing and political science at TNCC, and uses blogging as a platform to highlight developments in the Syrian Civil War. You can follow his articles on www.joshcastrowriter.com.