On Sunday, ISIS militants re-occupied the ancient Syrian City Palmyra. The terrorist organization held the city for 10 months after occupying it in May 2015.  During that time, ISIS militants destroyed countless ancient artifacts, carried out suicide bombings on civilians, and sold oil from nearby oilfields on the black market. The Russian government touted the ousting of ISIS from Palmyra by the Syrian military, the Russian military, and the Lebanese militant group Hezbollah in March as a major victory over the terrorist group. 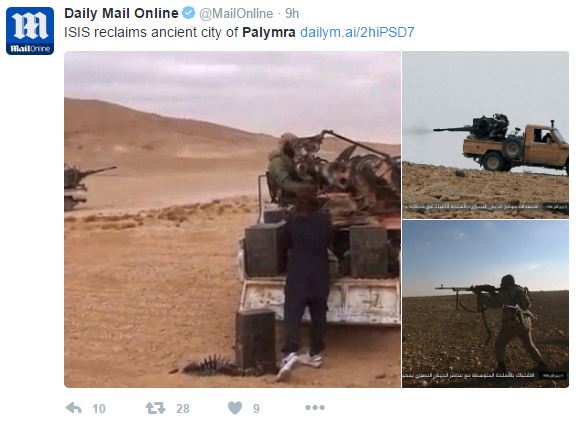 ISIS militants first re-entered the city on Saturday. They were driven from the city on Sunday but were able to retake the city just hours after a series of intense Russian bombing raids forced the ISIS militants to retreat to the outskirts of the town. A total of 64 airstrikes were conducted killing 300 militants, the Russian Defence Ministry has reported.

Many correspondents have reported that ISIS is using the Syrian and Russian concentration on operations to retake the city of Aleppo to the north as a opportunity to attack. Activists and civilians inside the city have told reporters ISIS militants are going door to door looking for remaining government forces.

Government forces are regrouping outside the city, preparing to launch a counter attack to drive ISIS from the city.