Watch an American soldier chase chickens around with a .50 cal sniper

Check out this hilarious video of a U.S. soldier chasing around some chickens and just taking part in some antics while hanging around at the Combat Outpost.

Sometimes, things can get a little boring and what better way to stay entertained than grab a massive sniper rifle and lug it around for everyone’s amusement?

Who needs a TV with entertainment like this? The soldiers seem amused and the soldier, known as Griner, seems to be having a little fun too.

During the War on Terror, day to day operations were becoming mundane and tedious. Soldiers and Marines operated out of small outposts around the countries and have to find things to keep them occupied.

They don’t have the luxuries of home, so they have to create their own fun, in the event that they have some spare time to do so.

This soldier decides to create some excitement by wearing nothing but ranger panties and what appears to be a sports bra and carry around a Barrett .50 cal sniper rifle with a smoke hanging out of his mouth. The rifle is almost as big as he is, only adding to the comical flavor. 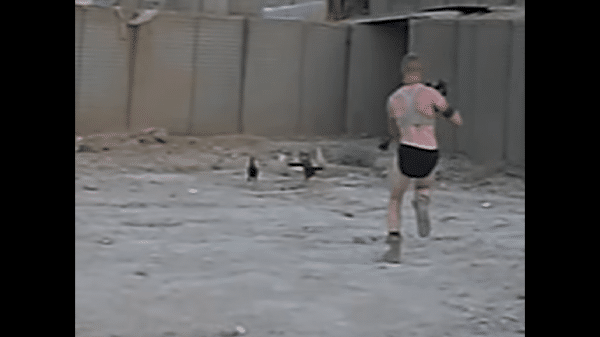 He stops to strike a pose so all can see.

He is just parading around looking for anything to spark an idea to draw from, just to give the guys a laugh.

He spots the ANA and is hesitant to wonder down by them but is quickly persuaded when he realizes his cunning is being videotaped.

Cock fight, cock fight! He finds it! The chickens! In order to draw attention from the ANA, Griner begins to chase the chickens around and yell out “Get on the ground.”

You can hear the laughter in the background.

The chickens have no intention of cooperating and they flee in different directions. One batch of chickens seek refuge in a small warehouse and while Griner tries to get them out by once again commanding the chickens to “Get on the ground” his efforts are in vein and he quickly gives up.

On to a new venture. As Griner heads back he is taunted by the other soldiers and a few photos are snapped. Surely, these pics and the video will circulate quickly amongst the soldiers that missed the show.

It shouldn’t take too long for someone like Griner to find some more mischief to get into that will surely be entertaining for the guys.