The parents, Temia Hairston and Michael Grace Sr. understand that their son, Michael Grace Jr. broke the law, but they don’t think defending the employees at the restaurant with a gun from an armed robber was just. 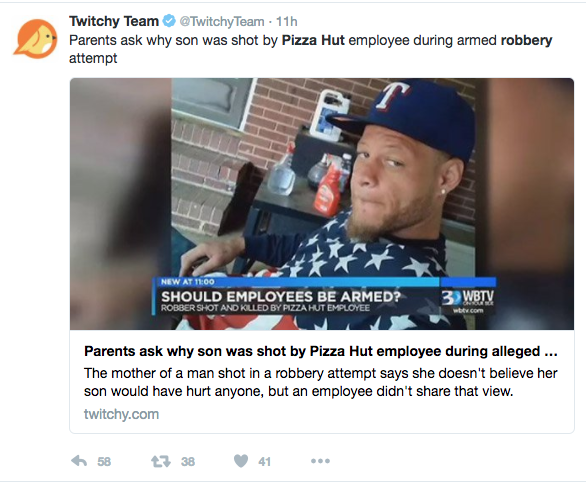 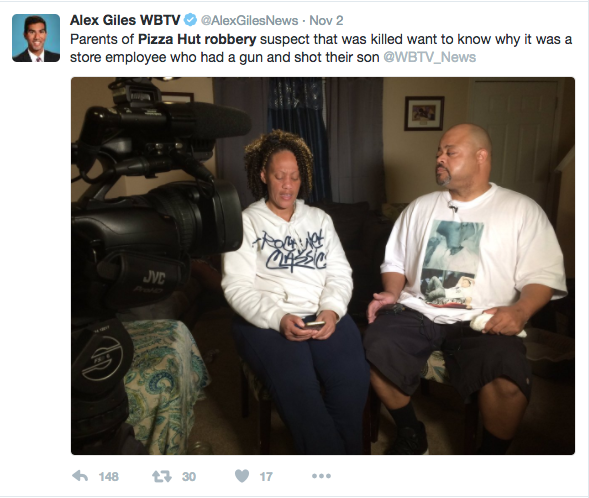 “If there was to be a death, it was not the place of the employee at Pizza Hut. That is the place of law enforcement,” Hairston told WBTV.

The parents said that their son wasn’t doing well financially and had come on hard times and as a result, resorted to crime to provide for his child. The parents added that their son previously worked at the Pizza Hut restaurant that he was attempting to rob and he never would have hurt anyone during the robbery.

“It was an act of desperation, but I do not believe that Michael would have hurt anyone,” said Hairston.

The parents are now angry that the employee used a gun to stop their son from robbing the restaurant. The mother thinks the shooting may have been personal due to her son’s conflicts with other employees at the restaurant.

“This wasn’t a body shot. This was a head shot. My son was shot in the left side of his head just behind his ear. A head shot is personal,” Hairston said.

Michael Grace Sr. added that she thinks that even though her son was committing a crime, he still had rights.

“Even a criminal has a right, to a degree,” said Grace Sr. “I’m not advocating what my son did.”

The family thinks that information is being withheld from the investigation and they want acknowledgement from Pizza Hut that their son used to work at Pizza Hut.

Pizza Hut previously released this statement after the attempted robbery.

“The local Pizza Hut franchise is fully cooperating with the Charlotte Police Department as they continue their investigation, but want to stress that the security of its staff is of utmost concern. They are providing support to the team members involved to ensure their health and well-being following this incident. The employee involved in the shooting has been placed on a leave of absence following further review.”

Charlotte-Mecklenburg Police Department released a statement after being asked about the connection to Pizza Hut.

“The investigation is still ongoing,” the statement read, “any new information will be released by Public Affairs.”