A gender studies professor at Rutgers University who is greatly bothered by the Donald Trump election win, and also happened to create a “Politicizing Beyonce” course, was taken to a psych ward for his political statements on Twitter and in the classroom.

Kevin Allred told the New York Daily News that on Wednesday, NYPD came to his house in Brooklyn and dropped him off at the Bellevue Hospital psych ward, where he was kept for 2 hours until doctors told him he had no psychological issues.

“Rutgers police told them I’m a threat based on political statements I’ve made on campus and on Twitter,” Allred tweeted after police arrived at his home. “And this is for exercising my … First Amendment rights.”

“I’m being labeled a threat and put in a psych hospital,” Allred added. “Trump’s crackdown on free speech has absolutely begun.”

Allred recalled a class he taught the day after Trump won the election.

“In class, we talked about flag burning generally as a form of protest, and what does the flag mean to different people,” Allred said. “Then I made a comment, essentially saying, ‘Would people feel the same way about being so lenient with the Second Amendment if people went out and got guns to shoot random white people?”

The day after the election, Allred tweeted out, “If I see any Trump bumper stickers on the road today, my brakes will go out and I’ll run you off the road.” 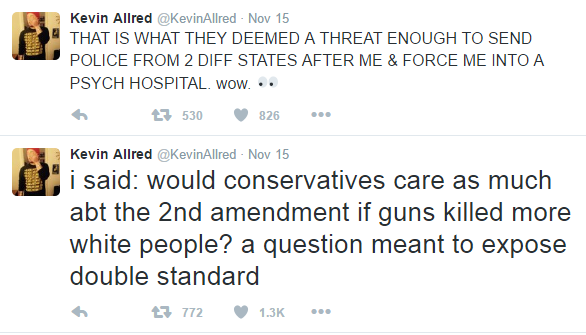 The NYPD told the paper that campus police asked them to conduct a “wellness check … on the professor based on comments he made in the classroom and on Twitter about killing white people.”

Rutgers spokesman E.J. Miranda said Wednesday the university’s police department “responded to a complaint from a student and took all appropriate action.”

Officers said that they arrived at Allred’s door only because Rutgers officials were unable to get in contact with him.