U.S. Military officials have confirmed that a National Guard jet accidentally dropped six training bombs and a training missile over Luzerne, Michigan on October 25. No one was injured as the bombs were training devices and landed in a wooded area in Michigan’s northern lower peninsula. 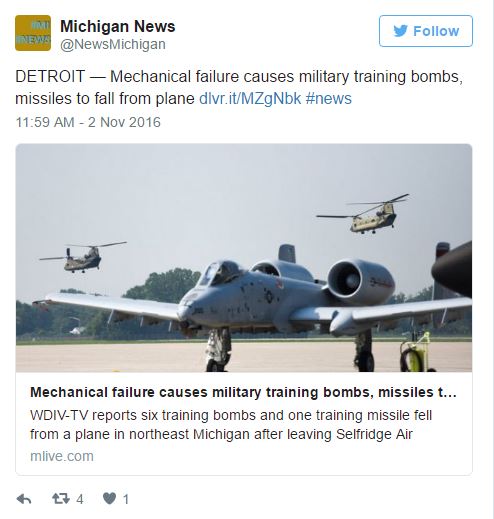 The A-10 was traveling from Selfridge Air National Guard Base in suburban Detroit to Camp Grayling in Grayling Township, MI on a training flight at the time of the incident.  It is believed that the aircraft involved was an A-10 Warthog due to Selfridge operating the A-10 as part of the 107th Fighter Squadron.

Lt. Col. Matthew Trumble, director of the Camp Grayling Air Gunner Range, called the situation “rare” and stated that a mechanical failure is likely to have caused the bombs to drop. He told local reporters:

“The phase of the flight they were in was prior to arriving to the range, so the operating procedure for that would be to have all weapon systems saved up, so there wouldn’t even be any switches, as it were, that were hot at that point, That’s why we suspect it was most likely mechanical fault.”

Trumble also confirmed that the bombs and missiles were non-explosive and were designed to release smoke if detonated.

Glamour Magazine Names U2's Bono A Woman Of The Year- Is He The Next Trans Celeb?