Three separate GOP offices in three states have been vandalized or burglarized in the past two weeks.

An Indiana Republican Party office had two bricks tossed through their windows earlier last month, a republican headquarters in North Carolina was firebombed and had the words “Nazi Republicans get out of town or else” spray painted on a nearby building, and an office in San Antonio used by Donald Trump’s campaign was burglarized. 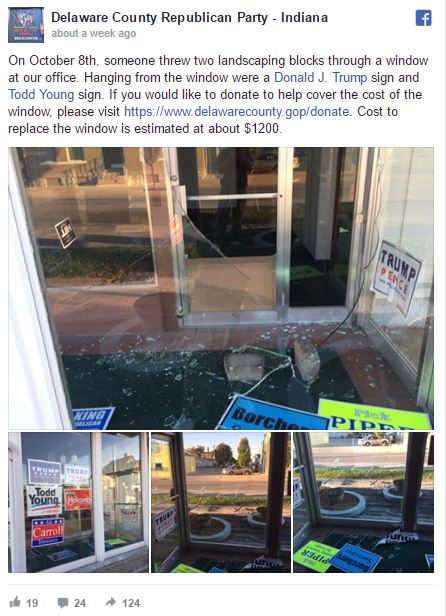 The Indiana office had signs for both Donald Trump and Rep. Todd Young hanging in the windows that were smashed with landscaping bricks.  The owners will have to replace the windows for $1,200. County Sheriff Ray Dudley has reported that there have been several reports of campaign signs being stolen from private property leading up to the vandalism.

Only one arrest has been made in all three cases. San Antonio police were able to apprehend a suspect that broke into the San Antonio office. They believe he was also responsible for several other burglaries and home invasions in the area.