An email from Clinton Campaign Chairman John Podesta’s personal gmail account released by Wikileaks this week shows communication between Podesta and Karen Finney, a spokesperson for the Clinton Campaign, in which the two display great dismay upon learning the San Bernardino shooter was a Muslim. As the first reports surfaced that the shooter’s name was “Sayeed Farouk,” the pair shared a strange disappointment that the shooter’s name implied he was from the Middle East and was not a gun-loving, “right-wing nut job”, white man.

On December 2, 2015 MSNBC’s Chris Hayes, host of All In with Chris Hayes, tweeted a few hours after the incident took place that NBC News reported the shooter was believed to be “a US citizen named Sayeed Farouk.” The tweet was shared via email with the Clinton campaign team which included Finney and Podesta. 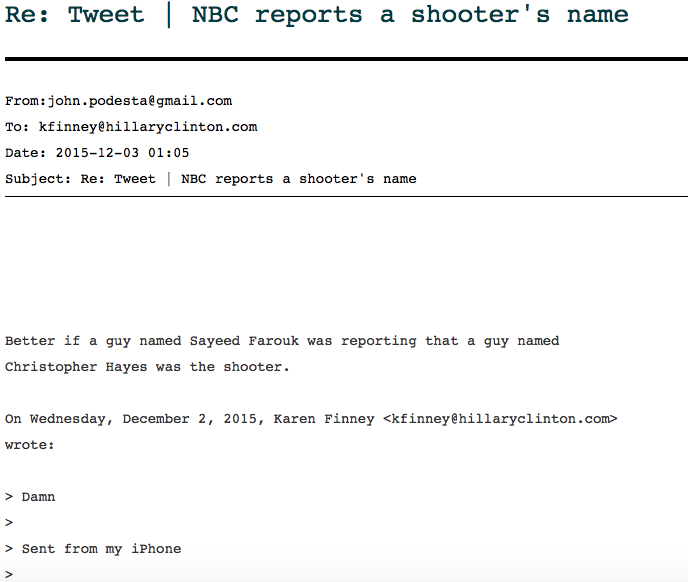 The email posted on Wikileaks.

Finney sent a reply to the email only to Podesta saying “Damn,” to which Podesta responded, “Better if a guy named Sayeed Farouk was reporting that a guy named Christopher Hayes was the shooter.”

The attack that took place in December of last year was determined to be an act of terrorism carried out by Sayeed Farouk and his wife, Tashfeen Malik. The two entered a holiday party of the company at which  Farouk worked and shot at his coworkers, killing 14 and injuring 22. The couple was killed a few hours later in a shootout with police.

Podesta was likely disappointed because the Clinton Campaign has been fixated on pushing the narrative that the problem with these attacks is gun violence and not a greater problem of Islamic terror. The campaign has pushed to try and separate Islam as a religion from the radical ideas that inspire islamic terrorists to commit acts of jihad. Days after the attacks he tweeted this: 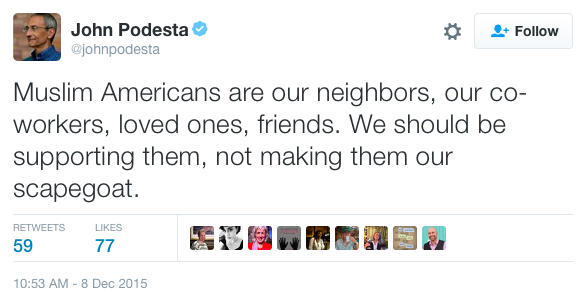