A highly decorated Special Forces soldier was identified by the U.S. Army as the soldier that was killed by an improvised explosive device in Afghanistan on Tuesday. 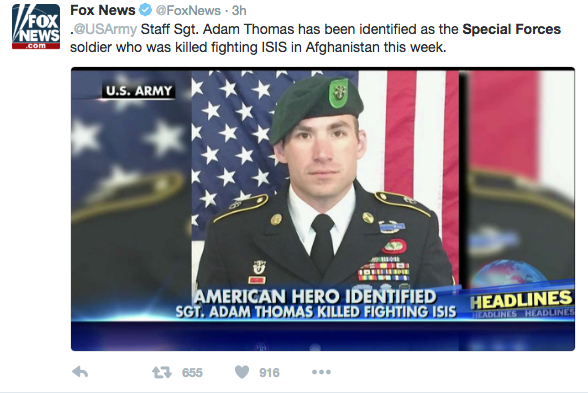 Staff Sgt. Adam Thomas, 31, of Tacoma Park, Maryland died in Nangarhar Province from injuries caused by an improvised explosive device that exploded during dismounted operations. He was partnered with Afghan forces when he was killed, Pentagon spokesman Peter Cook said Wednesday. The incident remains under investigation.

Thomas joined the Army in April 2008 and was supporting Operation Freedom’s Sentinel. He deployed to Iraq in December 2008 and did another two tours in Afghanistan. One tour was in 2011 and the other one in June.

“The 10th Special Forces Group wishes to express deepest sympathies and condolences to the family and friends who have been tragically touched by the loss of Staff Sgt. Adam Thomas,” Col. Isaac Peltier, commander of 10th Special Forces Group, said in a statement. “Staff Sgt. Thomas epitomized what it is to be a professional Green Beret and soldier. His loss from our organization and his memory will not be forgotten.”