Former NATO Leader: “The United States Must Be the World’s Policeman”

In an Op-Ed in The Wall Street Journal last month, Anders Fogh Rasmussen, a former NATO Secretary General said he knows “how important American leadership is” and that the “world needs such a policeman” to maintain peace and order.

Rasmussen expressed his concerns with Vladimir Putin, the President of Russia who he feels is “challenging the world order that the U.S. created so successfully after World War II.” Rasmussen said that during an encounter with Putin the Russian leader told him that NATO should be disbanded because it “no longer served any purpose.” Since the time that Putin rocked Rasmussen with his comments in 2009 Russia has invaded Ukraine and began military action in Syria.

“We desperately need a U.S. president who is able and willing to lead the free world and counter autocrats like President Putin,” Rasmussen stated. “A president who will lead from the front, not from behind.”

“The world needs such a policeman if freedom and prosperity are to prevail against the forces of oppression, and the only capable, reliable and desirable candidate for the position is the United States,” Rasmussen continued, adding that, “The presidential elections thus come at a pivotal point in history.”

The former NATO Secretary General went on about the poor state of the world. War torn regions and collapsing nations have turned into terrorist breeding grounds, Russia is threatening to take over Eastern Europe, and countries in Asia such as China and North Korea are war hungry and ready to launch nuclear attacks.

“In this world of interconnections, it has become a cliché to talk about the ‘global village.’ But right now,” Rasmussen continued, “the village is burning.”

“America alone has the credibility to shape sustainable solutions to these challenges,” he said.

“The Obama administration’s reluctance to lead the world has had serious consequences, and none is graver than the behavior of Mr. Putin,” Rasmussen said, before weighing in on the upcoming United States Presidential election. 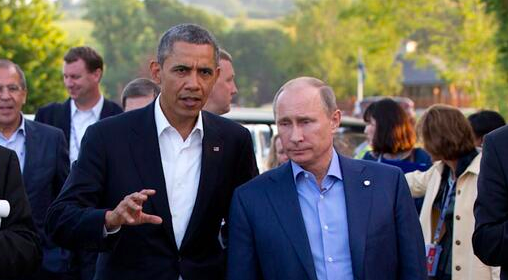 “The next president must acknowledge this inheritance. American isolationism will not make the U.S. and other freedom-loving countries safer and more prosperous, it will make them less so and unleash a plague of dictators and other oppressors. Above all, American isolationism will threaten the future of the rules-based international world order that has brought freedom and prosperity to so many people.”