Sandra Adams has been charged with murdering a WWI veteran in 1983. Adams is being charged with the murder of 92-year-old Edmund Schreiber. Schreiber was strangled to death at his home in Buffalo during a break-in on June 23, 1982. Adams was only 17 years old when she allegedly used eight of Schreiber’s own neckties to end his life.

Adams, who is now 50, pleaded not guilty and is currently being held in jail without bail on second degree murder charges. The heinous crime took place over thirty years ago when Adams and an unknown accomplice entered Schreiber’s Hastings Avenue home in Buffalo and proceeded to ransack the veteran’s belongings. Adams was one of Schreiber’s neighbors and knew the elderly WWI veteran would be an easy target. 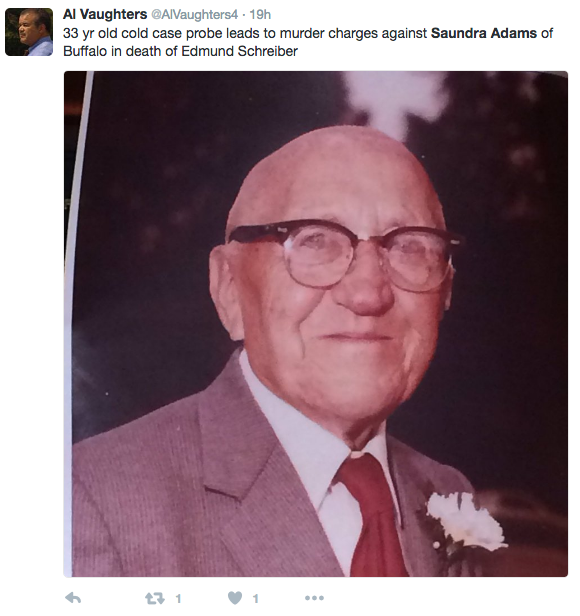 “The defendant’s DNA was found on multiple knots on the ties used to strangle him,”

Adams further incriminated herself  by not only brutally choking the life out of the 5 foot tall 100 pound veteran but also provided false reports to police that interrogated her in relation to the crime. She claimed to have never been at the scene of the crime or even in the bedroom where Schreiber was slain. Finnerty stated:

“The defendant has falsely denied being in the bedroom and being inside the home on multiple occasions. She has never offered an explanation for how her DNA wound up on his ties.”

Adams reportedly still lives in the neighborhood where the crime took place. She has no criminal record and has worked as a librarian for most of her life. Prosecutors claim that Adams’ lack of a criminal record and the amount of time that has passed should not influence the outcome of the case due to the brutal nature of the crime.