You will never see a group of brothers have such a great time as these six Gould brothers. They are all shotgun trick shot experts, and it shows. Watch as they perform a series of outstanding shotgun shot tricks that may leave you wondering, who thought of that?

The first trick is called the Limbo Shot and there’s a reason for that name. One of the Gould brothers tosses four discs up and behind him and then grabs his shotgun, bending backwards in a limbo position and shoots them right out of the sky, one at a time. 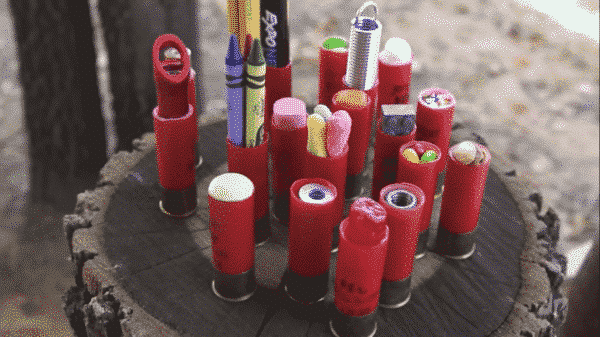 Next, brother Aaron cranks out some push-ups, but not your average push-ups. He lays belly down on a platform that has a shotgun on either side of him. In between each and every push-up he fires at a falling target, concludes the push-up and does it again from the other side, calling it a good workout.

The next stunt is called Three Behind the Back. Here, three discs are tossed behind the shooters back and up into the sky before he precisely blasts them out of the sky.

Creative ammo is another segment, where various ammo is used to fire at different targets, like melons, for example. First up the ammo will be toothpicks fired at a cantaloupe. When a barrage of toothpicks is fired at the melon, only one sticks. Next they fire an expo marker into a cantaloupe. The results are a destroyed marker and a handicap melon.

Time for Hip, Shoulder, Over the Head. Three discs are thrown from the hip and into the sky and you guessed it, the brother takes them out with no problems. But that trick doesn’t fare at all to the Mirror Shot. One brother throws the disc into the air while the other brother stands with his shotgun and his back to the target while holding a mirror to take it out. 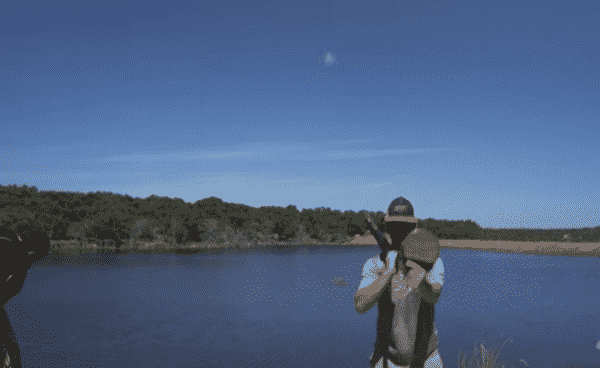 Shoot n’ Eject Action is next. The mesquite disc will be tossed into the air while the shooter is standing with an unloaded shotgun. A guy about ten feet up on a platform will drop the bullet into the gun with precision leaving enough time for the shooter to accept it and fire at the target.

Take a look at Two for the Show. Two discs are thrown into the air while a shooter waits with a loaded shotgun in each hand, firing simultaneously taking both targets out. Then it is time to fire AA batteries at a watermelon. They take a chunk out of the melon but get lodged inside of it. Then, they fire some double bubble gum at a pineapple, and it tears the fruit apart.

Each segment of the video shows that these guys have done some extreme practice to display such accuracy and precision. And, they sure are having a great time too!