This Day In History: The First Tank Prototype, Little Willie, Was Completed And Given Its First Test Drive

This day in history, September 6, 1915, the world’s first ever tank prototype was completed and had its first test drive. The tank, which was named Little Willie, was developed by William Foster & Company for the British army. 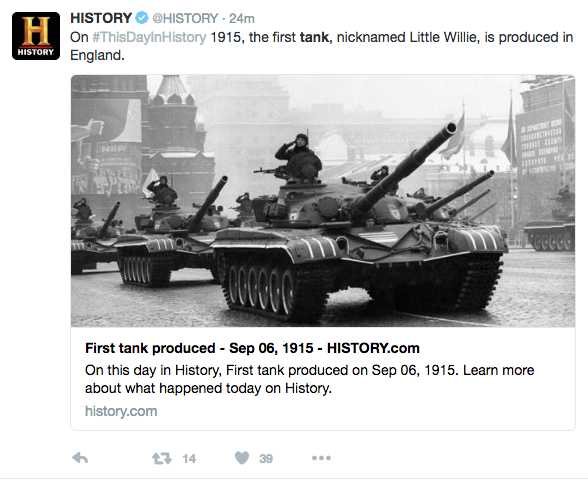 The tank weighed only 14 tons and had a very difficult time crossing trenches. It also got easily overheated, inched across fields at roughly 2 miles per hour and did not perform well on the battlefield. Despite this, people realized that the tank could revolutionize the war and the military weapon had great potential.

Several European nations had been working on the development of a shielded, tracked vehicle that could cross the uneven terrain of World War I trenches, but Great Britain was the first to succeed. After a few design improvements over the course of a few years, the tanks, which were lightly armed with machine guns, made their first appearance at the Battle of Cambrai in 1917, when 474 British tanks managed to break through the German lines.

The Allies began using the vehicles in increasing numbers throughout the rest of the war. After World War I, European nations on all sides continued to build tanks at a frantic pace, arming them with even heavier artillery and plating. This competitive stockpiling came to a lethal head on the battlefields of World War II.