The Largest And Most Expensive Stealth Destroyer Ever Built Joins The U.S. Navy

The largest and most expensive stealth destroyer ever built is ready to join the ranks of the U.S. Navy. The USS Zumwalt set sail for its new homeport in San Diego, California on Wednesday. The massive 610 foot ship has been under construction at Bath Iron Works since 2009, according to the U.S. Navy. The project cost a jaw-dropping $3.6 billion to complete the 16,000 ton ship.  Cpt. James A. Kirk will lead the USS Zumwalt and its 147 member crew to Baltimore for a commissioning ceremony before embarking for San Diego. 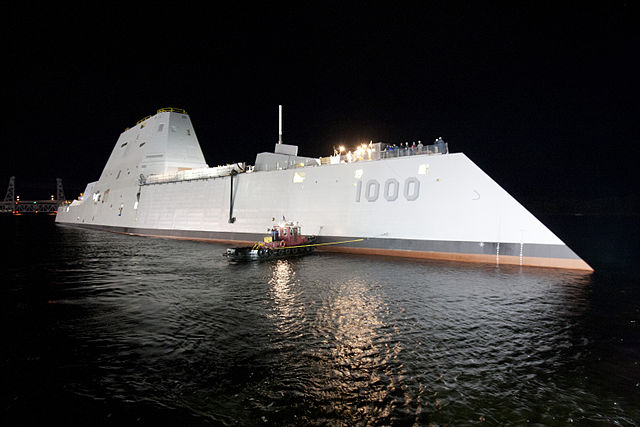 Photo of the USS Zumwalt while under construction.

Watch the USS Zumwalt in action below:

The ship features an angular shape to minimize its radar signature, an unique wave-piercing hull, an electric propulsion system and a composite deckhouse that hides the ship’s radar and sensors. The ship is also equipped with a new gun system that fires rocket-powered shells up to 63 nautical miles.

Capt. James Kirk has some reservations about taking the Zumwalt directly from the shipyard and directly into the massively powerful ocean conditions being produced by the remnants of hurricane Hermine but states it will not prevent or delay the ship from making its maiden voyage.  Kirk has complete faith in his crew he made the following statement before the Zumwalt began navigating down the Kennebec River on its way to sea.

“On this ship, teamwork is at a premium. The three things this crew exemplifies is high level of technical expertise, great teamwork and then the toughness to get done what needs to get done,”