Last night during CNN’s Military Town Hall with the President,  Commander-in-Chief Barack Obama was asked some tough questions from service members and their families regarding the many issues our nation and our nation’s troops face. When asked about the growing number of terrorist attacks in the U.S. and abroad, President Obama jumped on the opportunity to turn the focus away from battling the evil mentality of the terrorists and onto a different agenda: gun control.

Major Jonathon Yost, a chaplain at Fort Lee where the event was hosted, asked Obama about the terror attacks.

“Mr. President, since you assumed office in 2009, there has been a substantial increase in terror attacks around the world, and, likewise, here in the U.S., we’ve had major attacks in large cities such as Orlando, New York City, and elsewhere,” Yost said. “Sir, my question to you, are we doing anything now greater to combat Islamic jihadists?”

“First of all,” Obama responded, “it’s important to recognize that if you look worldwide, the number of terrorist incidents have not substantially increased. What we’ve seen are some very high-profile attacks, mostly in the Middle East, also in our European theaters. ISIL’s emergence, obviously, has underscored the fact that even after we killed bin Laden, even after we dismantled Al Qaida, which was the primary threat when I came into office, that the ideology of hatred and killing had metastasized.”

Killing Bin Laden, which happened in 2011 during the Obama Administration, is touted as one of the President’s greatest achievements since taking office. Though often used as a positive when discussing the war on terror, Wednesday night was one of the first times he acknowledged taking out leaders of radical islamists does not necessarily mean a decrease in attacks. 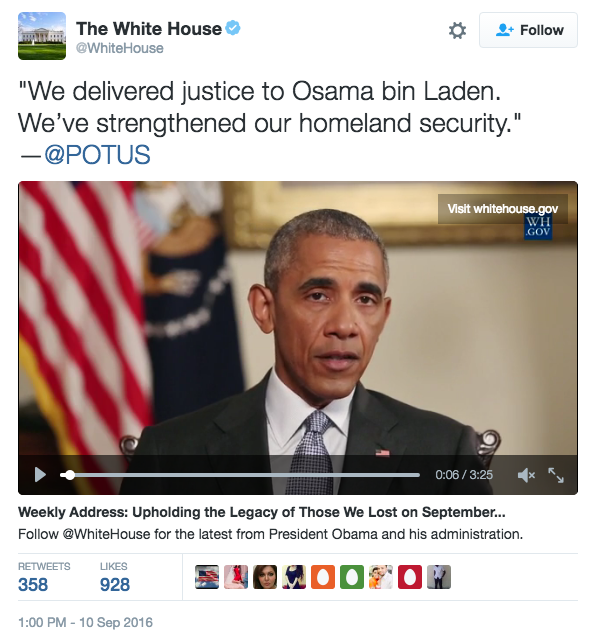 Obama continued on, saying that the threat of terrorism is different now than it was in 2001 because jihadists are focused on committing small style attacks rather than large, well-planned, multi-person style attacks like we saw on 9/11.

“And we’ve now seen a number of incidents here in the homeland, but they’re different in kind from the sorts of attacks that we saw on 9/11,” Obama said. “Part of what has happened is, because of the outstanding work of our men and women in uniform, and us dismantling Al Qaida, partly because of hardening the homeland, the incredible ramp-up of intelligence work that we do, the much more effective cooperation between law enforcement and the military, so that information-sharing, for example, between the FBI and cities and law enforcement officials there is much improved, because of the improvements we’ve made on aviation, it is much harder for terrorist organizations to carry out large-scale attacks.”

“The challenge we have — and this is going to be a challenge that we have for a while — is that it is possible for individuals or small groups of people to be inspired and, if they’re willing to die to carry out significant harm, even though they’re not directed from the outside, even though there’s not a complicated plot — and these so- called lone wolf terrorist actors are going to be our biggest danger, because they’re the most difficult to see coming,” he added.

Then, President Obama pointed to the terrorist attack in Orlando last June to pose concerns that the ability for these radical islamic jihadis to get guns is the issue.

“You’ve got an individual here who has not broken any laws, who, because of the way we organize our ability to purchase firearms, can go into a store legally, buy a bunch of firearms, and if he goes into a club and decides he wants to shoot a lot of folks, he can do a lot of damage,” he said.

President Obama continued saying that we’re going to “have to take some commonsense precautions about how people who may have been inspired by these jihadists are able to get firearms, for example, and go into a club or into a mall and start shooting people up.” 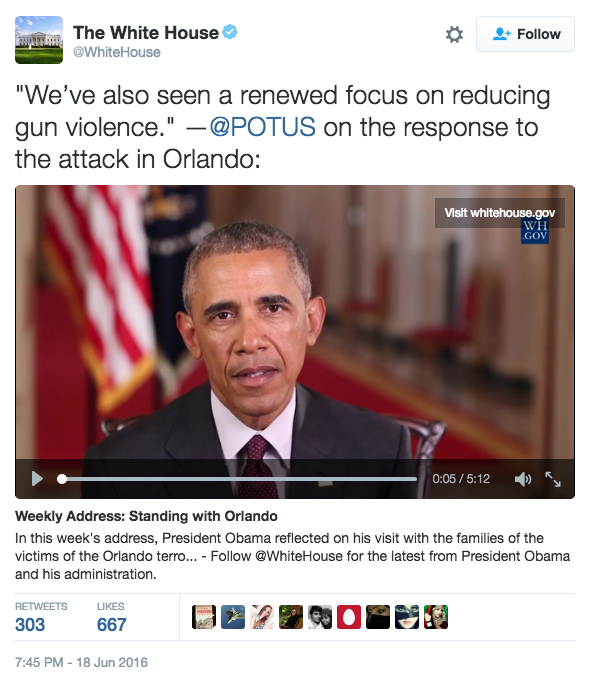 The desire to turn terrorist attacks into a gun control issue is not unique to President Obama. Democratic Presidential Candidate Hillary Clinton has also had a habit of changing the narrative of terror threats into a push for more gun legislation.