Kim Youn-Jin, a North Korean vice premier for education, was executed in July for reportedly having bad posture and falling asleep during meetings run by Kim Jong-Un. South Korean officials reported that Youn-Jin was killed by a firing squad after several hours, or possibly days, or interrogation.

Youn-Jins sleepy escapades earned him the label of “anti-party, anti-revolutionary agitator,” and a death sentence. Youn-Jin isn’t the only official that has recently paid the price for showing low morale. Two other officials, one being Kim Yong-Chol, the man in charge of Korean affairs, were assigned to “reeducation programs” which, in North Korea, means a long, or possibly permanent, stint at the concentration camp-like work camps that are peppered across the North Korean country side. 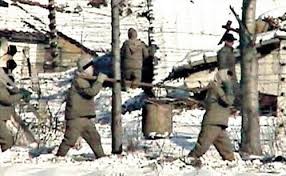 Choe Hwi, a senior official  from the propaganda and agitation department, has also earned himself a potential lifetime stay at a work camp. Yong-Chol and Whi are considered to be fortunate to be sentenced to the slave labor. Yong-Jin committed a much lesser crime yet received a far more brutal punishment. It appears Kim Jong-Un took Youn-Jins apathy as a personal slight.

“Kim Yong-Jin was denounced for his bad sitting posture when he was sitting below the rostrum,”

Harsh punishments and using executions as a political tool have caused 10 high-ranking North Korean officials to defect since January.