After finding out that the NFL threatened to punish a player for wearing a pair of cleats that honor those that died in the September 11 attacks 15 years ago, a police union vowed to take a stand and pay for the players fine if he wore the cleats.

There has been a lot of controversy surrounding the NFL over the course of the past several weeks regarding Colin Kaepernick’s decision to not stand during the national anthem, the NFL has decided to stomp down on a Tennessee Titan linebackers choice to wear a pair of cleats in honor of all of the people that died on 9/11.

The NFL banned Tennessee Titan’s linebacker Avery Williamson from wearing the cleats during the football game on Sunday.

The left cleat says 9-11-01, with the 11 in the outline of the Twin Towers, while the right one says Never Forget.

After being told that he would receive a fine for wearing the cleats during the football game on Sunday against the Minnesota Vikings, Williamson said that he would instead auction them off with the proceeds going to benefit Operation Warrior Wishes. 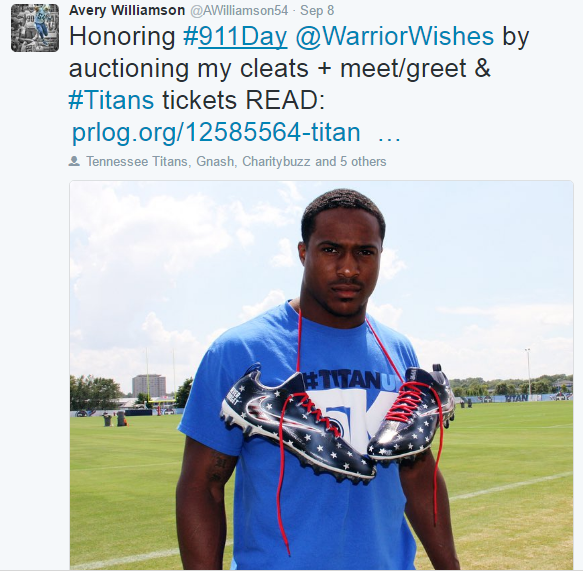 After hearing that Williamson would not be allowed to wear the cleats, two police unions vowed to step in and pay the $6,000 fine for violating the league’s policy on uniform regularity.

I don’t want to draw negative attention, so I’m just going to focus on playing the game,” Williamson told The Tennessean on Friday, before the police union found out about the ban. “Once I heard from them, I didn’t even try to argue anything. I just left it alone. I didn’t want to press the issue.”

Paul Nunziato, head of the Port Authority Police Benevolent Association, told the NY Post that NFL Commissioner Roger Goodell “committed a personal foul against humanity,” for not allowing Williamson to wear the cleats.

Despite being told that he would face a fine for wearing the cleats, Williamson decided to wear the cleats  in the game on Sunday.

I just felt like I got so much support across the country, and especially when the New York and New Jersey police unions said that they would pay my fine, that really meant a lot,” Williamson said after the game, “so I felt like if I didn’t wear them, I just wouldn’t have felt good about it. I felt like I had to do that, just for myself and to represent the people that were lost and the people that do their jobs every day to protect us. I feel like it was just a duty.”

The outpour of support & positivity has been amazing. Thank you!
🔧⬆ Photo G.Walkerhttps://t.co/4QjJtTOOh8 pic.twitter.com/04BYdJYgdV

This isn’t the first time that the NFL has refused to let players honor first responders or police. In August, the NFL prohibited the Dallas Cowboys from wearing a helmet decal to show support for the Dallas Police Department, following the terrorist attack that killed five Dallas police officers back in July.

The NFL also did not take action after Colin Kaepernick was seen during preseason wearing socks depicting police officers as pigs.

“Kapernick can wear ‘pig socks’ and not even garner a response from the NFL, but this guy wants to honor those who tragically died on 9-11 and he’s threatened,” Patrick Colligan, president of the 33,000 member New Jersey State Policemen’s Benevolent Association, told the NY Post.