On Tuesday, Florida Senator and former Republican Presidential candidate, Marco Rubio, filed a bill to forbid the U.S. Government from making any more ransom payments to Iran in exchange for hostages.  The bill came on the same day that the Obama Administration admitted that the entire payment of $1.7 billion dollars made to Iran was sent in the form of cash of various foreign currencies.

The Obama Administration has been under fire after it was revealed that $400 million dollars in cash was given to the Islamic State of Iran on the same day that they sent back four American hostages.  Though the administration held steadfast to the notion that the exchange was not done as a ransom payment, but instead a payment of settlement we owed Iran after a failed arms deal in the 1970’s, they admitted that they used the cash as “leverage” because the Iranians would not send off the plane with the hostages until the cash arrived in their possession.

The settlements and agreements seem to have “done nothing but embolden Iran and increase the number of efforts it engages in against Western and American interests” Michael Krull, adjunct professor of politics at Georgetown University and executive at Resilient Corporation, told American Military News. “Yet another murky chapter in the administration that was to be the most transparent ever.” he continued. 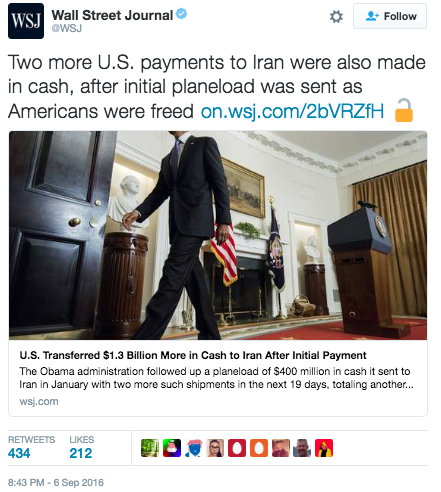 On Tuesday, a spokeswoman for the Treasury department said in a statement that both the $400 million originally sent and the $1.3 million owed in interest “flowed in the same manner” being sent in cash and foreign currencies by means of Geneva.  The spokeswoman said that the cash payments were necessary because of “effectiveness of U.S. and international sanctions,” which excludes Iran from the international finance system. 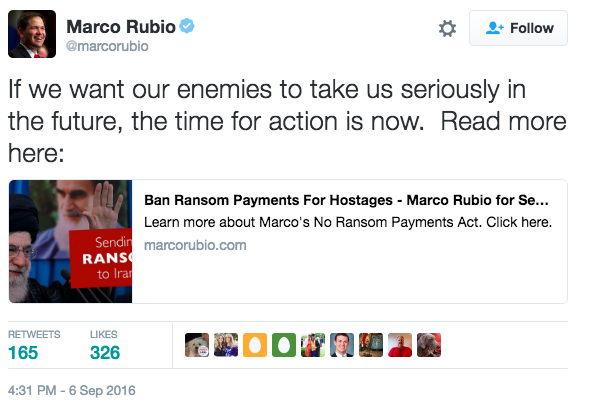 In light of the latest developments on the “leverage” payments to Iran, Senator Marco Rubio is introducing a piece of legislation called “The No Ransom Payments Act” that would forbid any future ransom payments to be made in exchange for hostages.

According to an Op-Ed by the Florida Senator in the Tampa Bay Times, the bill would not only forbid ransom payments from happening in the future, but would also forbid the U.S. from giving Iran money for any more settlement claims until Iran returned the $1.7 billion dollars paid for this exchange this year in addition to about $55 billion awarded by the U.S. courts to victims of Iranian-backed terror attacks and the Americans held hostage in Iran in 1979. 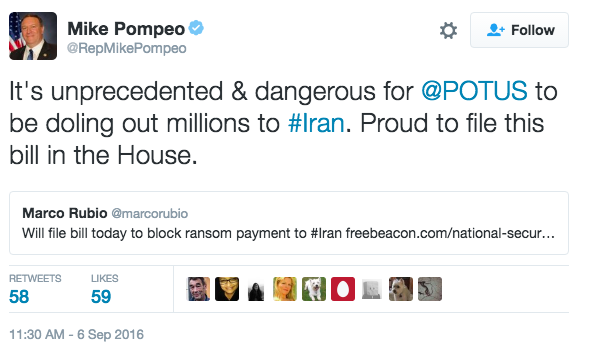 A version of the bill is also being proposed in the house by Republican Congressman Mike Pompeo from Kansas who has been an outspoken critic of the Obama Administration’s all too friendly relations with the Islamic Republic.

The Wall Street Journal reported that Congressional officials told that that during a closed door meeting it was confirmed that the remaining $1.3 billion was paid in two more installments delivered on Jan. 22 and Feb. 5.

On August 24th State Department Spokeswoman Elizabeth Trudeau told reporters during a press briefing that the remaining $1.3 billion dollars was paid out from the Treasury Department’s “judgment fund” just two days after the initial January 17th $400 million principle payment but could not comment on the means in which it was sent.