Commander-In-Chief Forum: Clinton Admits A Lot Of “Mistakes” While Trump Criticizes Obama And Clinton On ISIS

“I think under the leadership of Barack Obama and Hillary Clinton, the generals have been reduced to rubble.” Presidential Candidate Donald Trump said Wednesday night during a commander-in-chief town hall co-hosted by NBC and the IAVA, an organization which supports Iraq and Afghanistan Veterans . “They have been reduced to a point where it’s embarrassing for our country.”

Presidential candidates Donald Trump and Hillary Clinton appeared back-to-back on a makeshift stage built inside the Air, Sea, and Space Museum aboard the Intrepid which now resides in New York City.  The candidates were accompanied by an audience of Vets who took turns with Matt Lauer to ask the candidates questions.  Both candidates’ half hour sessions began with Lauer asking them to keep their attacks and insults of the other candidate “to a minimum.”

Clinton hit the stage first and responded to an intro question by saying that temperament, steadiness, and judgment are what make a good commander in chief.  As soon as the word “judgment” came up, Lauer took an opportunity to pivot the conversation towards the email scandal.

“It was a mistake to have a personal account. I would certainly not do it again. I make no excuses for it. It was something that should not have been done” she said, before going on about how well she has handled classified information through all of her time in government, recalling moments where she even huddled in a tent to avoid enemies bugging any room she was in.

Lauer spoke about a top secret drone system that was discussed via email during her time as Secretary of State and mentioned that FBI Director James Comey said someone in her position should have known better than to discuss such information on an unclassified system. Clinton rebutted by deflecting responsibility away from herself and instead decided to “point to the hundreds of experienced foreign policy experts, diplomats, defense officials who were communicating information on the unclassified system because it was necessary to answer questions and to be able publicly to go as far as we could, which was not acknowledging the program.” 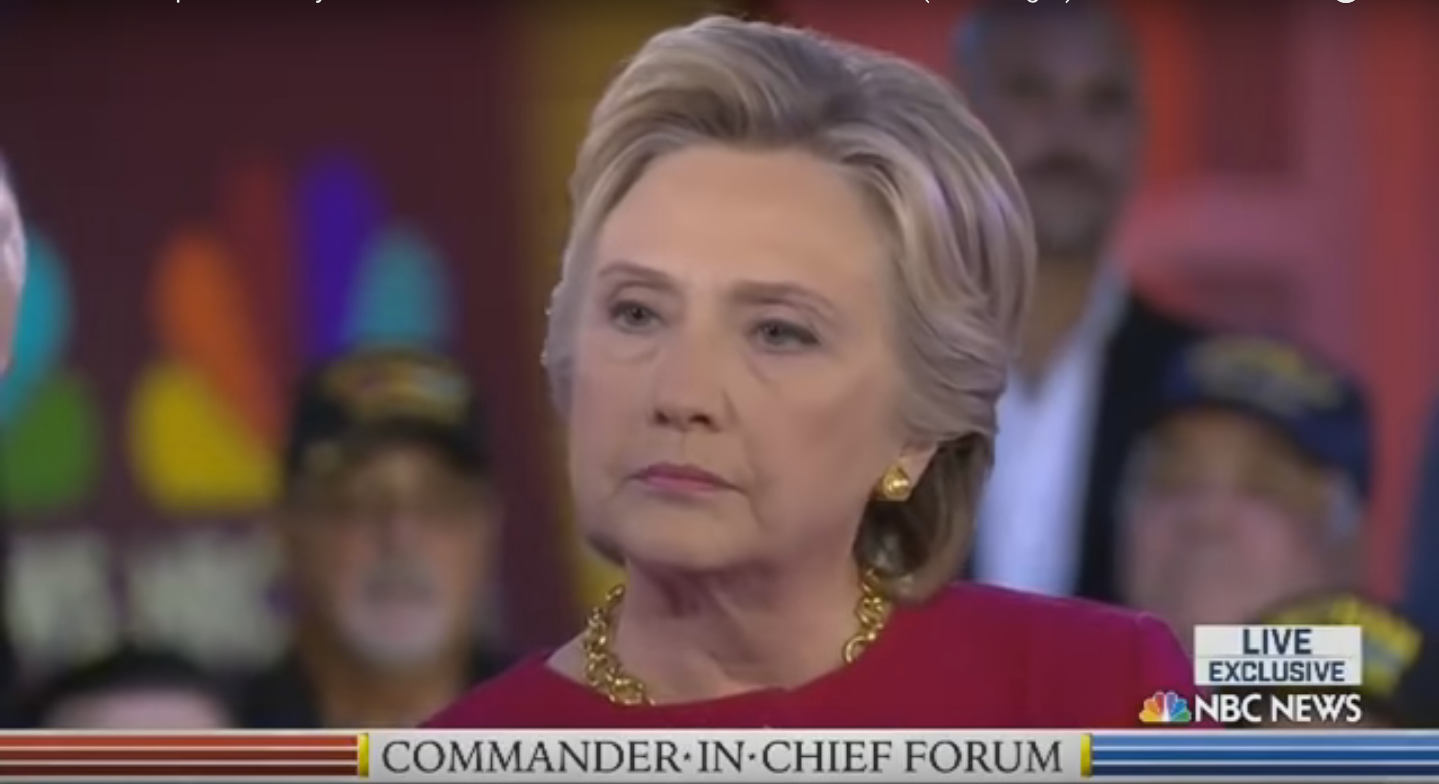 When speaking about the Iraq war Clinton said, “I think that the decision to go to war in Iraq was a mistake. And I have said that my voting to give President Bush that authority was, from my perspective, my mistake.”

However, she seemed to immediately counter that concept with the statement, “So those are the kinds of decisions we have to make on a case-by-case basis.”

She wrapped up the appearance with a responding to a question about if Americans would feel safer against terrorists under (another) Clinton Administration’s leadership. She said she couldn’t make such a large promise but she enforced that to feel safer, “We’ve got to have an intelligence surge. We’ve got to get a lot more cooperation out of Europe, out of the Middle East. We have to do a better job of not only collecting and analyzing the intelligence we do have, but distributing it much more quickly down the ladder to state and local law enforcement.”

After a commercial break Donald Trump made his way to the stage and responded to the intro “what makes you a good commander-in-chief?” question by referring to his leadership roles overseeing his many companies and “dealing with” other countries.

Turning the conversation to the fight against terrorists, Lauer asked about Trump’s comment that he “knows more about ISIS than the generals do” and whether he regretted such a statement. “Well, the generals under Barack Obama and Hillary Clinton have not been successful.” he said, before continuing that they’ve been “reduced to rubble.”

Trump talked about his request for military leaders to give him a substantial plan on how to combat ISIS within the next 30 days and how he would be open to interjecting their thoughts into his own plan.  Lauer hammered him on whether or not he had a plan of his own to which he replied yes but, “I don’t want to broadcast to the enemy exactly what my plan is.” 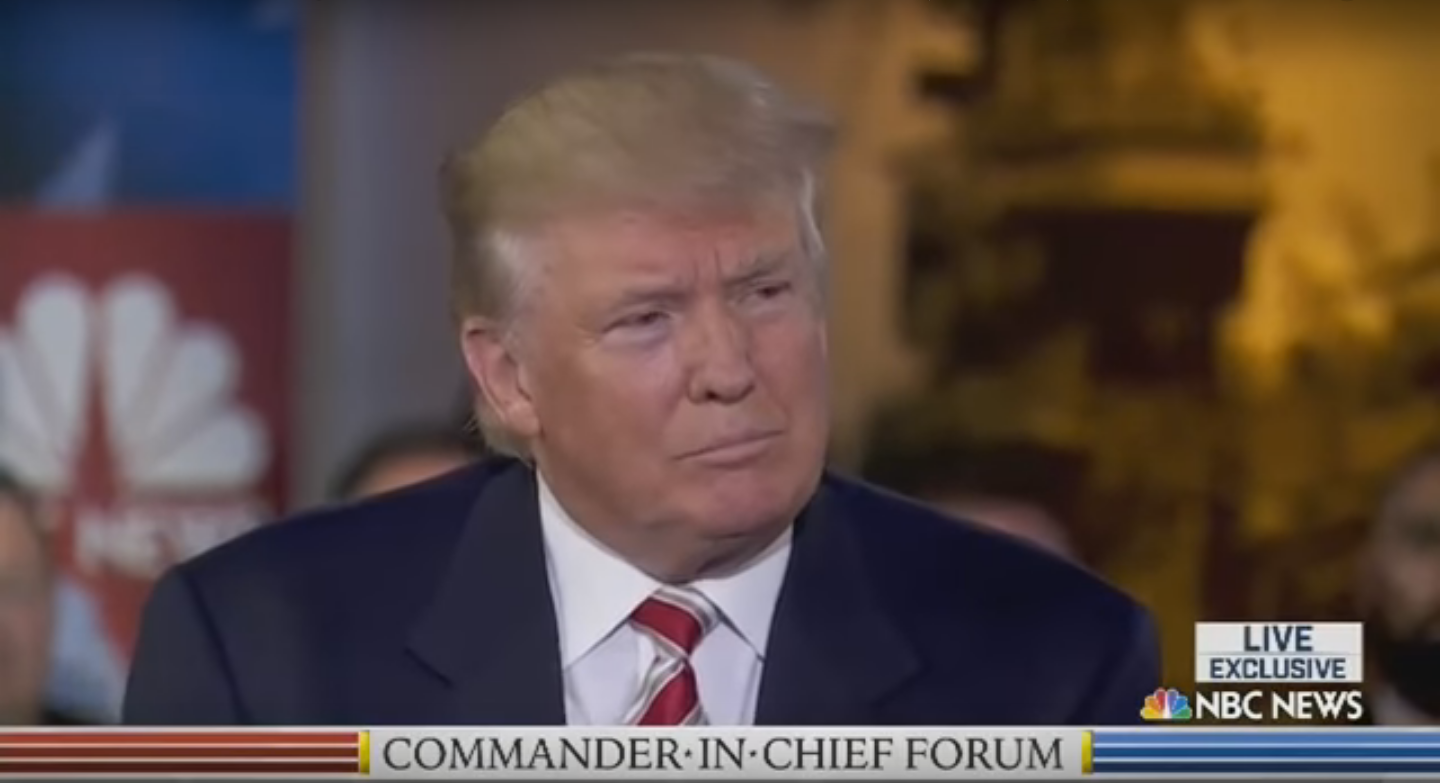 When asked about his plans for the V.A.  he stated that his plan, which can be found on his website, lays out the steps he plans to take if elected President.  Essentially, the plan consists getting wait times down and allowing Vets to receive private care if they need to though he continued with, “I never said take the V.A. — take the Veterans Administration private. I wouldn’t do that. Too much respect for our people. I would never do that.”

Finishing the event, Trump said when it came time to act as commander-in-chief and make the call to go to war that he “would be very, very cautious.”  He continued,  “I think I’d be a lot slower. She has a happy trigger. You look, she votes for the wars, she goes in Libya…”