An Army West Point football player tragically died in a single-car accident on Sunday Morning. 20-year-old Brandon T. Jackson crashed his vehicle approximately 30 minutes south of West Point. News 12 has reported that Jackson’s car struck a guardrail before flipping on route 9. Police are currently investigating the accident to determine the cause. 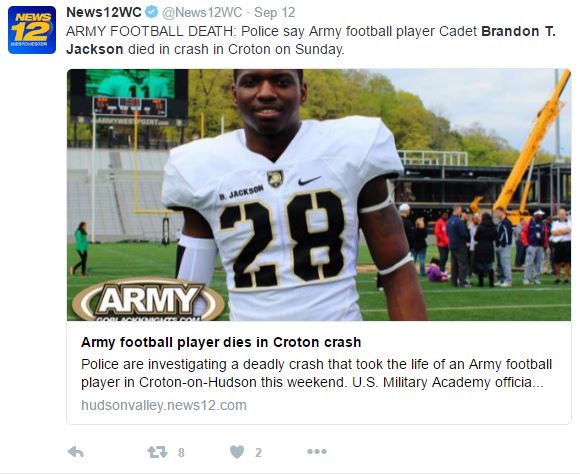 Jackson was the starting defensive back on the Army West Point football team. He earned himself two solo tackles and an assist in West Points’ victory over Rice University just one day before his death.

The Queens, NY native dreamed of one day playing in the NFL. He thought the best way to accomplish that goal would be to follow in his mother’s footsteps. His mother was an Army Reserve member and a proud Iraq War veteran. He attended USMA prep school before being accepted to West Point.

Students and teachers have been floored by the sudden death of the beloved athlete. Coach Jeff Monken stated in a press release:

“Words cannot describe the grief that our team is feeling over the loss of our brother and friend, Brandon. He was a beloved teammate and our hearts are with his family at this time of tragedy.”

“The Corps of Cadets is very saddened by the loss of their teammate, Cadet Brandon Jackson, who was a proud and committed member of Echo Company, 2nd Regiment,”

Jackson was majoring in management and enjoyed bike riding as well as playing basketball and chess according to school officials.