The Mayor of Corsica, France, has banned the head-to-toe covering swimsuit known as a burkinis following a beach brawl that involved hatchets and harpoons. Five people were hurt when local youths clashed with North African families. The altercation escalated into 200 local Corsicans marching on a local North African community while chanting “this is our home!” Riot police were brought in to quell the crowd and burkinis are banned at all Corsican beaches to avoid further confrontation. 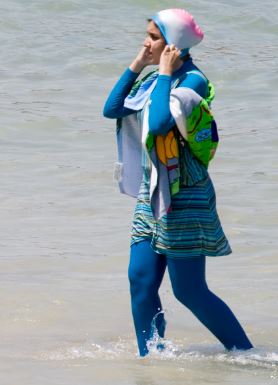 An example of a “burkini” often worn by Muslim and Arabic beach-goers.

Witnesses claim the brawl started when a Muslim family took exception to a foreign tourist taking photos of one of the burkini-clad women. Stones and bottles were allegedly thrown at the teenagers as a fight broke out. Other locals quickly arrived to support the youths. Hatchets, fishing spears, and machetes were reportedly brandished by both parties. The locals reportedly set fire to cars believed to be owned by the Muslim bathers. At least five people were brought to the local hospital for treatment. All have been released and are expected to make full recoveries.

Corsica has become the third french town to ban the Islamic swimwear. The controversial head-to-toe covering is a controversial type of swimsuit designed to comply with Quranic instruction for women to dress modestly. The mayor of Cannes, France David Lisnard recently banned the controversial garment at all beaches in Cannes citing a link between the garb and radical Islam. He claims that the burkini doesn’t represent all Muslims and is “profoundly archaic.” Villeneuve-Loubet has also banned the burkini based on concerns about hygiene and other sanitary reason.

Police are investigating the incident but have not yet commented on what they believe caused the disruption.